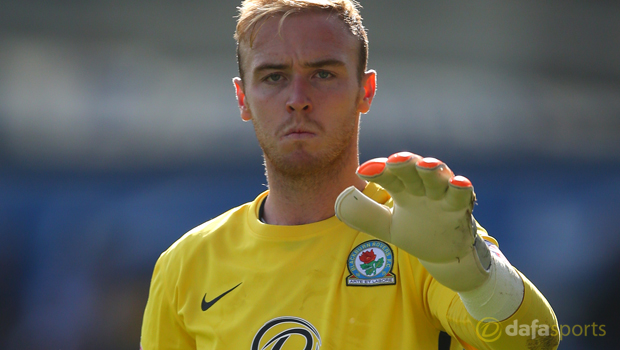 Goalkeeper Jason Steele says it is time for Blackburn to make their own luck as they await the visit of in-form Derby County to Ewood Park on Wednesday night.

Rovers suffered a first Championship defeat in five games when they went down 3-0 to MK Dons on Saturday. Adam Henley wad red carded early in the game, leaving Steele and Rovers to face more than 80 minutes a man light.

Gary Bowyer’s side hung on bravely but goals in the final 20 minutes from Ben Reeves and Simon Church put an end to their resistance.

Steele felt they could have been on level terms in the second half, with Jordan Rhodes going close only to see his volley superbly saved by David Martin.

The Rovers stopper says now is not the time to feel sorry for themselves and they must instead go out against Derby with the intention of controlling their own fortunes.

“We can’t be the hard luck team, we can’t be crying out for a bit of luck, we’ve got to create our own luck and I think we’ve done that recently with how hard we are working, so hopefully we can take that into Wednesday,” he said.

Steele wants to tap into the positivity that had started to grow around Ewood Park prior to the international break and says the best way to do that is by showing they can compete with the best teams in the division, starting with Derby.

“We’ve got to stay positive, before the international break we were flying and we felt that we could beat anybody and that is still the case,” he added.

“We’ve got to make sure that we perform on Wednesday. They’re a top side and it is the perfect game for us to bounce back. It is a great test for us and we are more than capable of winning the game.” Blackburn are 3.00 to defeat Derby at Ewood Park.