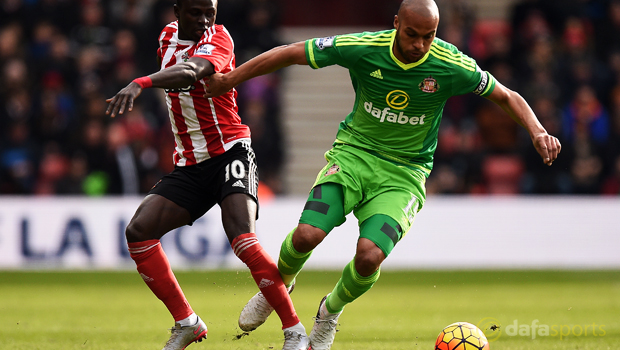 Younes Kaboul says Sunderland need to get over the disappointment of conceding a late equaliser against Southampton and start preparing for Newcastle.

The Black Cats defender pointed to the St James’ Park meeting as a monster clash for Sam Allardyce’s side.

Kaboul says it now seems set in stone that two from Sunderland, Newcastle and Norwich will be relegated this season.

Sunderland were within seconds of taking three points off Southampton at St Mary’s on Saturday but Virgil van Dijk headed home a last-gasp leveller for the home side.

It means Sunderland are one point ahead of Newcastle and Norwich in 17th place in the Premier League table.

With Swansea and Bournemouth both winning at the weekend, the gap is now eight points to the team in 16th place and Kaboul says it looks like being three from the bottom four to go down, with Aston Villa cut adrift at the bottom, nine point from safety.

“It definitely looks like three from four now,” he said. “It’s us, Newcastle and Norwich, and Villa of course.”

Sunderland have a week off to prepare for the trip to Newcastle and Kaboul says they must be ready for the derby clash.

Newcastle have lost five of their six in the league while Sunderland have been beaten just once in five.

Sunderland beat Newcastle 3-0 at the Stadium of Light earlier in the season and Kaboul knows the importance of the fixture.

“There’s some important games left and the one coming is the most important for the fans, and for us also,” he said.

“We have to be ready for the derby day and show we can win. Both clubs and both cities live for this game, and we have to make sure we give everything for the fans because they really deserve it.”

Sunderland are 1.50 to be relegated from the Premier League while neighbours Newcastle are 1.57.