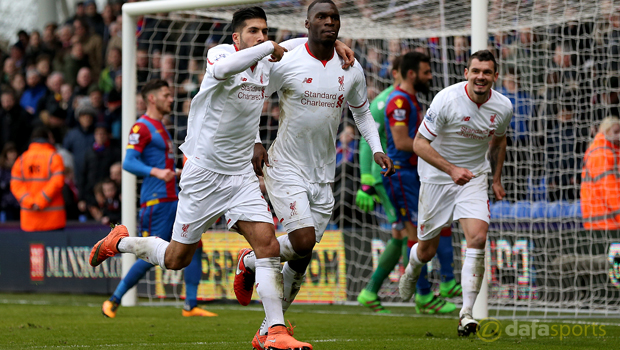 Jurgen Klopp’s side nicked all three points despite having gone 1-0 down to Joe Ledley’s strike just after the half-time break and having had captain James Milner sent off after an hour.

Roberto Firmino took advantage of a mistake from Palace keeper Alex McCarthy to level matters and, deep into stoppage time, sub Benteke went to ground under a challenge from Damien Delaney in the penalty box.

Referee Andre Marriner hesitated to make the award but his assistant appeared to make the decisive call and Benteke was ice-cool as he slotted home the spot-kick.

Pardew was in no doubt the Liverpool striker had made the most of the challenge, insisting Delaney had made minimal contact with the Belgian.

He told reporters: “That touch doesn’t warrant that dive. If that touch warrants a collapse like that, then wow.”
“It’s the dive that makes the linesman’s mind up,” said the Eagles boss. “The linesman assumes that little touch is a penalty.”

Palace are now without a Premier League win in 12 games and Pardew felt the officials needed to be absolutely certain they were making the correct decision.

Even with the benefit of television replays, Pardew felt it was inconclusive and he said his team would not have benefited from such a controversial award at the other end.

He said: “You’ve got to be 100-per-cent sure. In super slow motion, the knee touches the foot and he goes over like he’s been shot.
“If it had been us, we would not have got it.”

Palace are 21.00 to be relegated this season, their long winless streak leaving them in 15th place in the table.