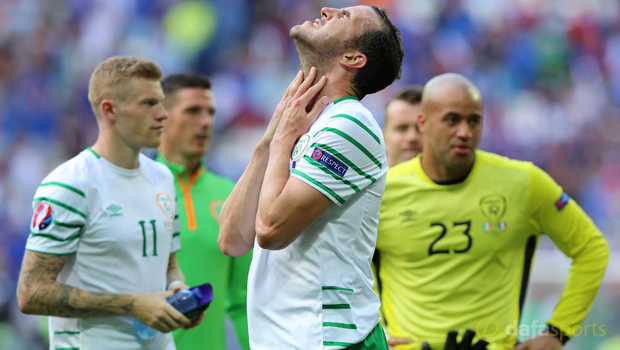 Sunderland captain John O’Shea has refused to be drawn on his international future following the Republic of Ireland’s exit from Euro 2016.

O’Shea was one of the most experienced members of the squad at the European Championships boasting 111 caps.

The 35-year-old was handed a starting role in the opening two group matches against Sweden and Belgium, however, he was dropped to the bench for the games with Italy and France.

The former Manchester United man was brought on late in the last-16 defeat to France as Shane Duffy was shown a straight red card, although Martin O’Neill’s men were sent home by the hosts.

The Sunderland defender along with Shay Given and Robbie Keane all look likely to call time on their international careers with another two-year campaign ahead as they look to qualify for the 2018 World Cup in Russia.

However, O’Shea has refused to make a final decision so quickly after their tournament was ended and insists he will take some time to consider his options as he possibly looks to focus his future on domestic football with Sunderland, who are priced at 5.00 to be relegated in 2016-17.

“I’m not going to get involved in that now,” he told reporters.

“I’m going to enjoy tonight with a special group of players and a special backroom staff and coaching staff.

“We’ll reflect on some positive things, and also things we know we can improve on going forward. “Let’s wait and see.”

O’Shea was introduced to Sunday’s game in unfortunate circumstances with Ireland down to 10-men but he feels Duffy made the correct decision to keep them in the game.

He added: “It was so unfortunate for Shane, he’d been playing so well and he had to take that chance because obviously if we had conceded another one it would definitely been the end of it.

“He took the card for the team. We were still plugging away to try and get that equaliser, but I’m so proud of everyone involved.”