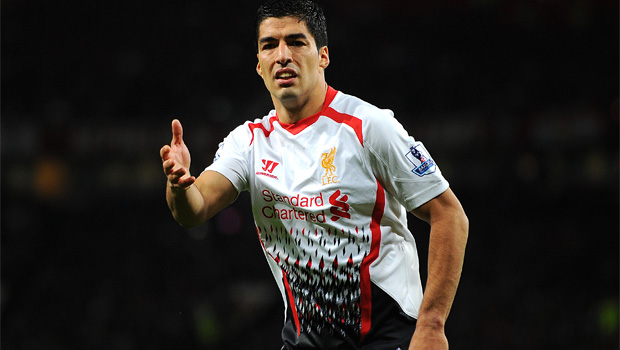 After a summer of turbulence, Luis Suarez says he is totally committed to Liverpool after making his return from a 10-match ban for the Reds against Manchester United.

At times during the most recent transfer window it looked as though the Uruguay international would never play for Liverpool again after making it clear he wanted to leave Anfield.

The 26-year-old was the subject of two failed bids from Arsenal, one of which was reported to have triggered his £40million release clause.

Despite Suarez and his agent insisting he had a clause in his contract allowing him to join a Champions League club the Reds stood firm on the situation, insisting he wasn’t for sale on numerous occasions.

With the transfer window now shut and Suarez not going anywhere anytime soon, Liverpool boss Brendan Rodgers included the striker in his starting XI for the first time this season in Wednesday’s Capital One Cup tie with Manchester United.

It was the first time Suarez had been available to Rodgers since he was handed a lengthy ban for biting Chelsea’s Branislav Ivanovic during a game in April.

While it wasn’t the return Suarez wanted as United beat Liverpool 1-0, he claims to have put any thoughts of a move away from Merseyside to the back of his mind and is focused on helping his current club have a successful season.

“I know it was a difficult moment but for myself and for the team it’s very important I’m back because I can help the team and [being] off the pitch I can’t.

“All the time I try my best on the pitch. I’m here to help the team and help Liverpool and I’ll try my best.”