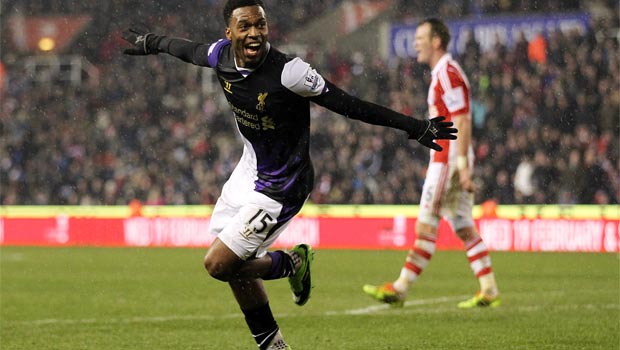 Daniel Sturridge marked his return to the Liverpool side with a goal in the 5-3 win at Stoke and is hoping that is the end of his injury problems.

The striker had been forced to miss six weeks of action as he battled back from ankle ligament damage but came off the bench at the Britannia Stadium to notch his 12th goal of the season.

Sturridge renewed his fearsome partnership with Luis Suarez and that can only bode well for Liverpool who consolidated fourth place in the Premier League with the win.

The England international also set up Suarez for the fourth goal and is now convinced the Reds can push on and challenge for the title over the second half of the season.

“I’m delighted with the result for the boys,” Sturridge revealed.

“It’s a difficult place to come and play and we showed a lot of character so we’re very happy with the result.

“Being out of the fold has been very hard for me mentally, but it’s also good that we’ve been getting results and working very hard as a team.

“It’s very hard when you’re on the side, watching a team, and you want to be involved in the fun and be out there.

“I’m just happy that we’re up there within touching distance and we’re in the top four. It’s great to be a part of it.”

Meanwhile Sturridge believes Liverpool have enough quality to challenge, especially with Suarez back in top form with 22 goals so far.

“We’ve got other world-class players out there and it’s important that as a team and a unit we keep working hard, take each game as it comes and try to get maximum points in every game we play.”