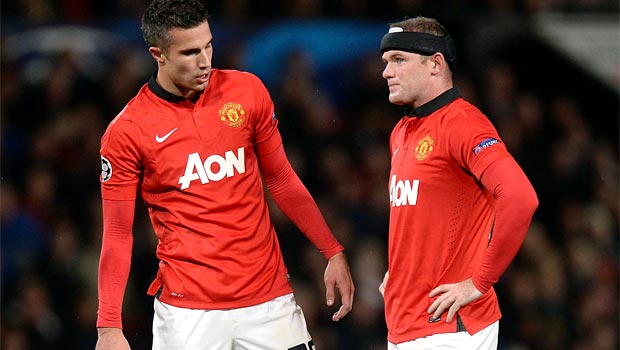 The latter has been out of action for the Red Devils since the December 10 after suffering a thigh injury in the Champions League victory over Shakhtar Donetsk, while former Everton star Rooney will be sidelined due to a groin problem suffered in the 2-1 loss to Tottenham on New Year’s Day.

The pair have been a vital part of the Man United team this season, contributing 21 goals to the Premier League holders in the campaign so far, highlighting their importance to the side.

Rooney did originally miss the trip to Norwich on December 28, but returned to the line-up for the fixture against Tim Sherwood’s side, only to suffer a groin problem – an injury which David Moyes has confirmed will keep the England international out of the game on Sunday at least.

“He has got a groin injury and won’t be available on Sunday,” he said.

“He’s got a chance of facing Sunderland on Tuesday.”

There is more woe for Moyes going into the game with the news that Ashley Young will also be missing after damaging his shoulder in the last game, meaning the Scot will be without three of his most senior players.

United will be hoping to get back to winnings ways after their six game unbeaten run in all competitions was ended on New Year’s Day, and despite the injury dilemma, the Red Devils will be looking to repeat the 4-1 victory they recorded against Swansea earlier on in the season.

Michael Laudrup is also facing a selection headache with winger Pablo Hernandez likely to miss out after suffering a hamstring injury, with Leon Britton a doubt though illness and Michu, Michel Vorm and Nathan Dyer all definitely out.