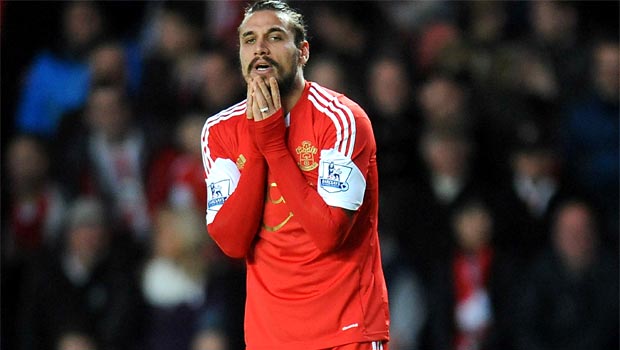 Southampton will have to do without striker Pablo Osvaldo for their next three fixtures after the Italy international has been found guilty of violent conduct.

The 27-year-old has been banned with immediate effect and has also been fined £40,000 for his part in a touchline fracas in December’s draw at Newcastle.

Osvaldo, who was watching from the sidelines after being substituted, reacted angrily to a tackle in stoppage time where team-mate Morgan Schneiderlin was booked for a late challenge on Newcastle defender Massadio Haidara.

Staff and players from both benches became involved in a touchline melee, with referee Mike Jones sending Newcastle coach Andy Woodman, who has been fined £1250, and Saints back-room staff member Toni Jimenez to the stands.

The ban means Osvaldo is ruled out of Saturday’s third round FA Cup clash with Burnley at St Mary’s Stadium and will also miss the Premier League games at home to West Brom and away to Sunderland.

Saints have suffered a slump in form since their impressive start to the Premier League season which saw them reach a Champions League spot at one stage, however they have managed just one win in their last nine fixtures.

Osvaldo, who is the club’s record £15million signing after joining in the summer, has failed to match the large transfer fee having found the back of the net on only three occasions, and the recent news will not do the striker any favours.

The English trio of Jay Rodriguez, Adam Lallana and Rickie Lambert have stolen the show this season for the Saints, with the three contributing 19 goals between them, resulting in England call-ups for each of them.