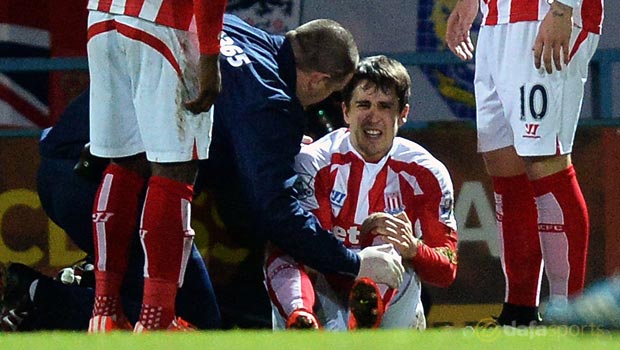 Stoke City’s Bojan has revealed his recovery from injury is going well and is hoping to play some part in the season-opener against Liverpool.

The 24-year-old put pen-to-paper on a four-year contact at the Britannia last summer after former club Barcelona accepted a bid believed to be around the 1.8million euros mark.

The former Spain international broke into the Catalans first team in 2007 and made over 100 appearances in the four years to come, winning numerous trophies which included three La Liga titles and two Champions Leagues.

The forward fell out of favour though and, after loan spells at Roma, Milan and Ajax, he swapped sunny Barcelona for the colder climes of the Premier League at Stoke.

Bojan took a while to adapt to life in England but his performances improved as his time at the club increased, with four goals scored in 16 top-flight appearances.

The Spaniard’s season was cut short in January after suffering a serious knee injury in the FA Cup clash with Rochdale but the forward has revealed he is back in training and looking forward to the new season.

“I’m very happy to be back and to see everybody again and now my focus is to start the new season playing at the same level I was before I got injured,” he said.

“I’ve been working hard the last few months because I wanted to get fit and make sure I was back playing with my teammates on our first day of pre-season,” Bojan added.

“Yesterday was my first day back with the team and I feel really, really good so now I have to work hard in July to feel the difference and see if I’m ready for the first game of the season.”

Stoke take on Liverpool in the season-opener in what is a repeat of the final game of the previous campaign, which the Potters won 6-1.

The Reds are slight favourites away from home at 2.38 while Mark Hughes men are available at 2.88 to clinch all three points at the Britannia.