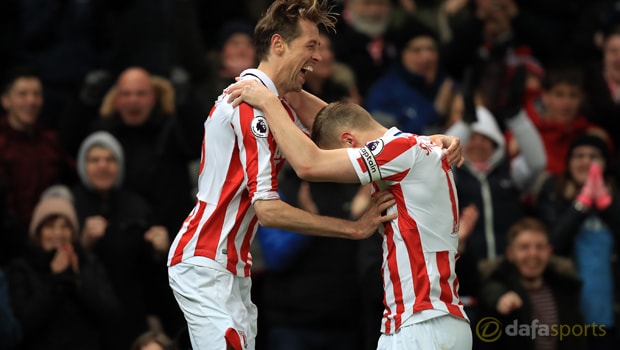 Stoke City striker Peter Crouch is willing to stay with the club beyond this month after returning to first-team duty.

The former Liverpool and Tottenham star was considering his future with the Premier League outfit after falling down the pecking order under boss Mark Hughes.

Crouch, who is out of contract in the summer, has spent the last five-and-a-half-years with the Potters but his lack of action had alerted several Championship clubs.

The 35-year-old had not scored in the league since May 2015 but he has now scored two goals this season after a busy festive period.

After starting three games in eight days, Crouch helped his side climb to 11th on Tuesday when he scored in the 2-0 win over Watford.

Although rumours have linked him with a move away from the club, Crouch insists he wants to remain on board.

He told reporters: “I’d love to stay. But it’s one of those things that’s out of my hands, isn’t it? I’d like to stay but it doesn’t seem to be happening at the minute.

I’ll keep playing and see what happens. “Of course I’ve been looking at [a move]. I know that I can still play at this level so if it’s not here it will be with someone else.

But it’s gone well the last few games and hopefully I’ll be here for a bit longer. “I haven’t played much in the last 18 months, it’s been very frustrating.

I’ve always believed in myself, always known I can impact games at this level. Thankfully the manager’s thrown me in for the last three games.”

Crouch will be hoping to start Saturday’s home FA Cup clash with Wolves. Hughes’ men are 1.62 to win the tie, the draw is 3.80 while Wolves are priced at 5.50.