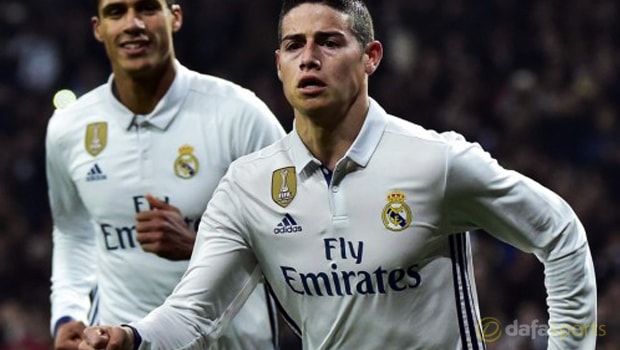 Real Madrid midfielder James Rodriguez insists he wants to stay at the club after helping them beat Sevilla 3-0 on Wednesday night.

Rodriguez has been linked with a move from the Santiago Bernabeu after failing to secure first-team football under manager Zinedine Zidane.

He has made just eight appearances in La Liga this season, scoring one goal for the Spanish giants.

In December he admitted he could not confirm his next move after receiving offers from abroad but Madrid are hoping he stays put.

They’re under a transfer embargo until the summer but Rodriguez has now decided to stay with Madrid.

The Colombian international scored two goals during the Copa del Rey first-leg win and insists he wants to stay and fight for his place and win more silverware.

“Now a new year has begun for me and I’m staying at Madrid,” he said. “Everyone in the team wants to play all the time, and we all go through bad moments.

“I just want to play well when I have the chance and be able to do good things like I did today and help the team by scoring goals.”

Zidane was also delighted with his response and was quick to praise his work ethic in the win over Sevilla.

He added: “James had a good game,” he said. “He worked hard and scored two goals. He was important, just like everyone else.”

Rodriguez will be determined to help Madrid win the league title this year and they are currently three points clear of Barcelona with a game in hand.

Zidane’s men are 1.44 favourites to win the title, while Barcelona are priced at 2.63.