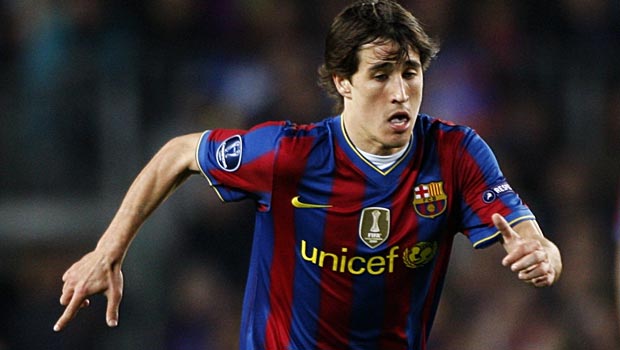 Stoke boss Mark Hughes says he is delighted to offer the sought after Bojan Krkic the chance to play in the Premier League after he joined from Barcelona.

The 23-year-old has agreed terms on a four-year contract with Stoke after they fought off competition from around Europe for his signature.

Ajax were said to be keen on the Spaniard after his loan spell at the club last season but he has opted to move to the Britannia Stadium instead.

The deal represents a significant step forward for the Potters, who have captured a player once dubbed ‘the next Lionel Messi’ while he was at the Nou Camp.

Bojan came through Barca’s famed youth academy, La Masia, before making his debut as a 17-year-old. Having struggled to nail down a spot in the Barcelona team, Bojan moved to Roma before returning to the Catalans two years later.

He again struggled and has spent the last two seasons with AC Milan and Ajax before completing a £3million move to Stoke this week.

Hughes, a former Barcelona player himself, says the arrival of Bojan is a red letter day for the club and is delighted to have him in his squad for next season.

Hughes said: “Anyone who knows European football will be aware of him as a player and the fact that he sees his future at Stoke City is really exciting and an endorsement of the club itself.

“He’s desperate to prove himself in the Premier League and we’re pleased to be able to offer him that platform.

“The time he spends with the squad in Germany will help him settle in and will give myself and the coaches the chance to take a good look at him.”

Bojan will be looking to prove himself ahead of Stoke’s first Premier League game of the season which is against Aston Villa on August 16.

The Potters are 2.03 to make a winning start, with the Villans 3.36 to come away from the Britannia Stadium with a win.