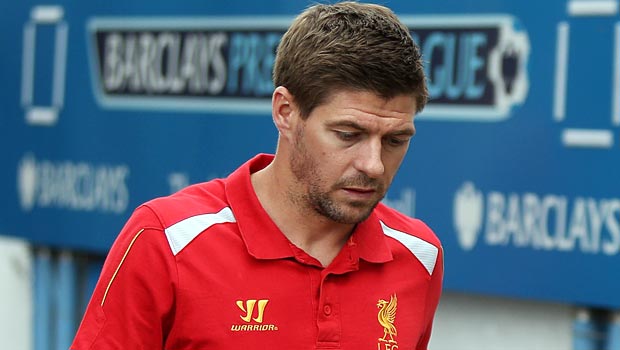 Steven Gerrard is hoping to hold new contract talks with Liverpool in the near future, while he feels they will be involved in the Premier League title race this season despite the loss of Luis Suarez.

The 34-year-old former England captain, who recently announced his retirement from international football following the disappointing World Cup in Brazil, is hoping the decision will help prolong his career in the domestic game.

Liverpool boss Brendan Rodgers recently stressed that Gerrard remains a big part of his team plans at Anfield and suggested that they would look to enter discussions about prolonging his stay on Merseyside.

However, while the player has confirmed that he would like to stay at the club beyond the end of his current deal in 12 months, he claims nothing has been put on the table at this moment in time.

Gerrard said: “Brendan has mentioned a new deal a couple of times in the media, but no talks have happened.

“I am not trying to call the club out or anything like that. It’s not like that. I’m sure we will talk in the future but we will have to wait and see.

“I hope that I’m here for more than one year, of course I do, but it is all about this season for me.”

Looking ahead to this coming season, Liverpool will be looking to go one better after finishing second behind Manchester City in the race for the Premier League title.

Top scorer Suarez has since been sold to Barcelona, while Liverpool have drafted in a host of players such as Emre Can, Adam Lallana, Rickie Lambert, Dejan Lovren, Lazar Markovic and Divock Origi – who will spend the next 12 months on loan with Lille – to an already strong squad.

Gerrard added: “I still believe we can be involved in the title race. I believe if we had Luis Suarez, we’d be favourites. We played some incredible stuff last season and we are a very, very good side – don’t forget that.”

Liverpool are 10.00 to win the Premier League, while Chelsea re favourites at 2.85.