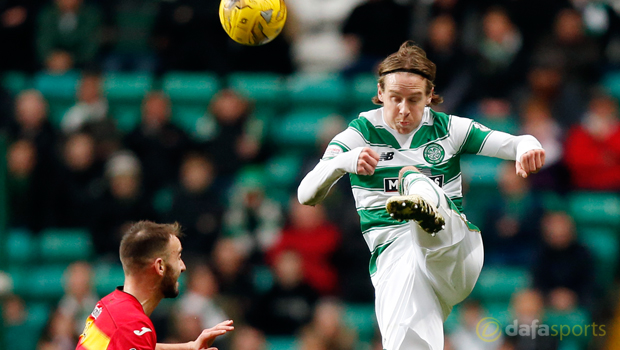 Celtic midfielder Stefan Johansen says he is uncertain if his future will be in Glasgow when his contract expires next year.

The Norway midfielder has been a key figure in the Hoops since he was signed from Stromsgodset for £2million two years ago but his current deal will expire in the summer of 2017.

The Scottish champions have been actively moving to secure the long-term futures of some of their key men, with Nir Bitton and Leigh Griffiths signing new deals recently.

Johansen, voted PFA Scotland Player of the Year in 2015, says negotiations are ongoing between his agent and Celtic but he admits he doesn’t know how they will pan out.

“It is very positive for the club to sign those kind of players long-term,” he said. “For me, we are in talks. That’s all I can say and we will take it from there.

Johansen has suffered a dip in form this season, prompting manager Ronny Deila to give him an extended break after Norway failed in their Euro 2016 play-off tussle with Sweden in November.

The midfielder says that was a good time for him and he relished the break and the opportunity to recharge his batteries after his performances had come in for criticism.

“My head was spinning at the time. I just went away to quiet places in Norway and Scotland with my fiancée. It was good for me, I felt it helped and it’s going to help me in the long term,” he said.

“Of course it has been a difficult few months. It is always better to have positive things said about you, but I think the criticism makes you more grown up and you learn from it.”