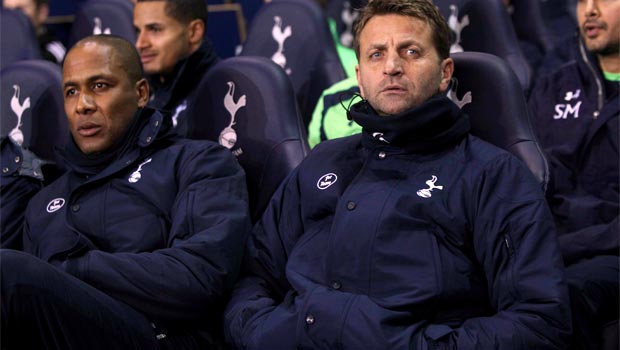 Caretaker manager Tim Sherwood saw his Christmas wish granted as he was named permanent manager of Tottenham Hotspur on Monday.

Sherwood, who made nearly 100 appearances for the north London club during his time as a player, took over for the Capital One Cup defeat to West Ham after Andre Villas-Boas was sacked.

It was not the best way to impress the board, but then came a pleasing 3-2 victory away to Southampton, in which the recalled Emmanuel Adebayor bagged a brace to add to his goal against West Ham when brought in from the cold by Sherwood.

That proved to be an inspired move and one that surely helped chairman Daniel Levy to make his decision.

He said: “We were extremely reluctant to make a change mid-season, but felt we had to do so in the club’s best interests.

“We have a great squad and we owe them a head coach who will bring out the best in them and allow them to flourish and enjoy a strong, exciting finish to the season.

“We are in the fortunate position of having within our club a talented coach in Tim Sherwood.

“We believe Tim has both the knowledge and the drive to take the squad forward.”Nevertheless, it is a big leap of faith considering that Sherwood has no proven managerial experience, and he will need all the help he can get from his backroom team of Chris Ramsey and former Spurs team-mates, Les Ferdinand and Steffen Freund, if he is to guide Spurs to a Champions League spot.

They are currently in seventh place on 30 points, just six points off the top, and face what appears to be a comfortable task at home against out-of-form West Bromwich Albion on Boxing Day.