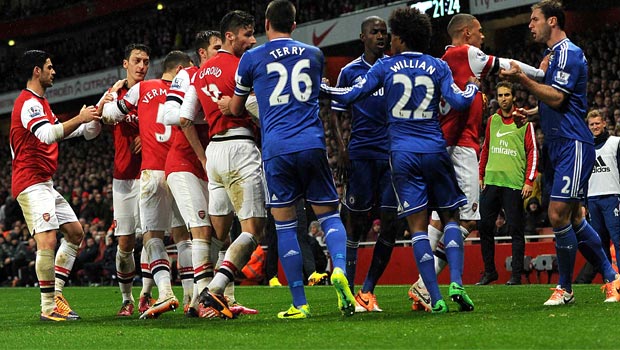 Title chasers Arsenal were held to a goalless draw at home by London rivals Chelsea on Monday night.

Arsene Wenger’s side needed to win to go back to top of the Premier League, while a positive result for Chelsea would have silenced the critics who have labelled them boring.

However, on a windswept, rainy night at the Emirates, neither side did enough to convince their respective supporters that come May one of them would be top of the table.

Arsenal were taught a lesson by Manchester City recently, losing 6-3, a result that exposed their limitations, but at least they managed to score on that occasion.

On Monday that never looked the case as Jose Mourinho’s visitors dug in deep and barely gave them a sight of goal.

With chances few and far between, the only noteworthy moments in the first half came when Frank Lampard smashed a pass from Eden Hazard against the Arsenal crossbar, followed by a penalty appeal by the home side when Theo Walcott was brought down in the area by Willian, a request turned down by the ref.

The second half saw even less goalmouth action, although there was the odd midfield skirmish, with the best chance falling to Gunners striker Olivier Giroud 10 minutes from time.

The Frenchman was just two yards out when somehow contriving to loop the ball over the bar as he was tackled, and that was just about it as far as the chances went.

The result means that Jose Mourinho has still to lose to Arsene Wenger, boasting five wins and five draws, but this match will quickly be forgotten.

Mourinho was the happier of the two managers after the final whistle, and he said:

“Our goalkeeper was not in the game, we controlled the game defensively. We let Arteta play the ball from side to side, we were completely under control.”

Both sides play on Boxing Day, with Chelsea at home to Swansea, while Arsenal make the short journey across London to face West Ham, and with leaders Liverpool away at Manchester City on the same day, it promises to be another crucial twist in the title race.