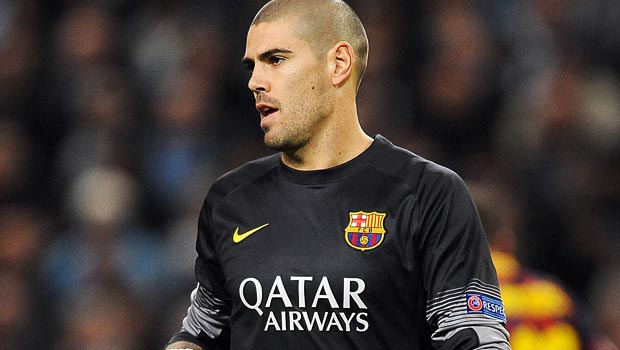 Spanish stopper David de Gea insists compatriot Victor Valdes has not been brought to Manchester United to replace him as the club’s number one.

Former Barcelona stopper and free agent Valdes is currently training with the Premier League giants as he continues his recovery from a serious knee injury that forced him to miss the World Cup in Brazil.

That has fuelled speculation Valdes could be offered a deal at Old Trafford, while De Gea himself has been linked with a move to Real Madrid.

United manager Louis van Gaal is yet to offer Valdes a contract and De Gea claims his side are supporting the former Barca star as he recovers from injury, rather than planning a change in first-choice keepers.

“Yes, my contract runs out in 2016. But they didn’t sign him for that”, he told Spanish newspaper AS.

“Victor had a difficult injury, he had a bad time and the boss knows him well and has given him the opportunity to recover there.

“Yes, Victor is training over in Manchester, he’s still not 100 percent after his injury. When he is fully fit he will start to train with us. He’s still not training in goal with us. From time to time he comes out with the goalkeeping coach but very little still.

“Van Gaal knows him well because he gave Victor his debut at Barca and has a special affection for him and whenever possible we have to help where we can.

United travel to Arsenal on Saturday as the Premier League resumes after the international break, with De Gea’s side 3.31 to take all three points. The Gunners can be backed at 2.15 and a draw is 3.30.