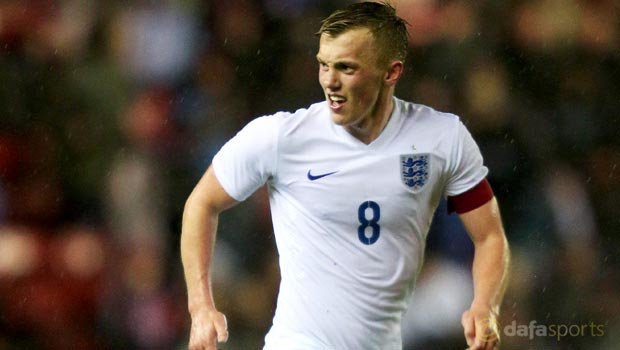 Southampton midfielder James Ward-Prowse has called on his England under-21 team mates to kick on a pick up some silverware this summer.

The Young Lions are set to kick off their under-21 European Championship against Portugal in Group B on Thursday.

Gareth Southgate’s men are eyeing a successful trip the Czech Republic, although their recent record in the tournament doesn’t make for pleasant reading.

England under-21s, who are priced at 5.50 to win the tournament outright, last claimed victory in 1984, following on from their triumph two years earlier when they also won the title in 1982.

However, they have fallen at the first hurdle in the last two tournaments and are hoping to atone for that this time around.

Ward-Prowse was one of a number of Premier League players to have a huge impact during the qualification process, and the midfielder hopes to use experience to his advantage.

The 20-year-old insists that a lack of silverware throughout the squad will not have a detrimental effect on the way they approach the tournament.

Ward-Prowse said: “Playing for England is the best thing for us as players.

“Although we haven’t had that experience of winning trophies as a country, that’s all in the past and we’re trying to look forward.

“We want to change that perception of us as players, by being successful and winning a trophy.

“I loved football growing up and my dad told me all about 1966. It would be great to do something like that.”

The Saints man believes getting off to a perfect start against Portugal in Uherske Hradiste is crucial, before they face Sweden and Italy in Group B.

He added: “There’s a lot of emphasis on the first game because, if we get off to a good start and get a win, we’ll be in a good position for the other two games.”