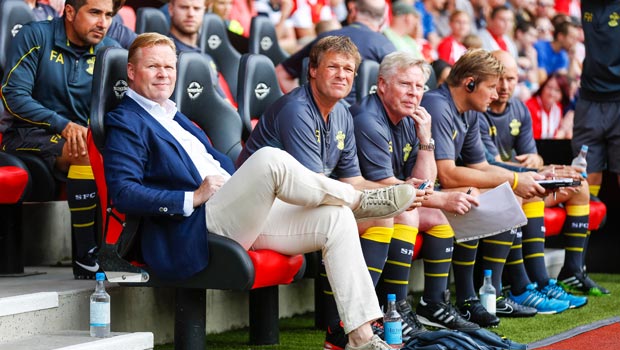 Southampton manager Ronald Koeman has admitted that he is not yet happy with his squad and hopes to add at least two more signings this week as he continues to re-build at St Mary’s.

The south coast club was the subject of heavy interest from elsewhere in the Premier League this summer as manager Mauricio Pochettino departed along with a number of key players.

Liverpool, who are priced at 16.00 to win the league, swooped to sign Rickie Lambert, Adam Lallana and Dejan Lovren, while Manchester United and Arsenal secured deals for Luke Shaw and Callum Chambers respectively.

Koeman was appointed as the Argentinian’s successor and has been busy trying to strengthen the depleted squad to keep the club moving in the right direction.

The Saints have welcomed seven new players so far, including Fraser Forster, Shane Long, Graziano Pelle and Dusan Tadic, but Koeman insists he still has some work to do.

The former Feyenoord boss has been heavily linked with a move for out-of-favour Atletico Madrid defender Toby Alderweireld but he has refused to comment on names as he continues to pursue his targets.

Koeman said: “I don’t talk about names of players.

“In two positions we are trying to bring in new players and we hope to bring (them) in this week. The club is doing everything for that and I hope we will finish with that this week.”

Southampton midfielder Jack Cork is the latest player to be linked with an exit from St Mary’s with Crystal Palace and Swansea reportedly interested.

However, Koeman insists that the 25-year-old, who scored his first goal for the club in the 2-0 Capital One Cup win at Millwall on Tuesday, is happy as he moved quickly to play down the rumours.

He added: “He’s a Southampton player.

“There were a lot of rumours but Jack is doing very good and has ambition to stay with Southampton.”