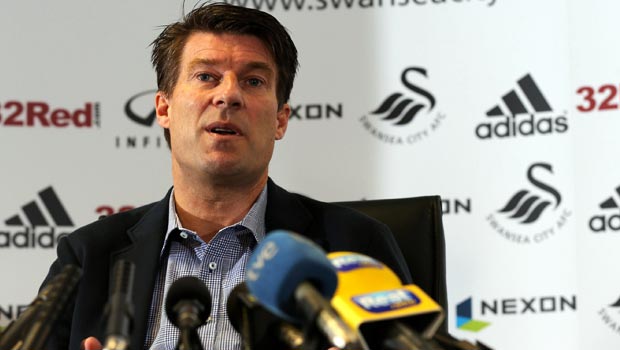 With just one win in their last 10 Premier League outings, Swansea City have decided to sack manager Michael Laudrup just days before the Welsh derby against Cardiff City on Saturday.

The Dane did a fine job to take over from his very successful predecessor Brendan Rodgers and having filled the void left by the now Liverpool boss, Laudrup helped the club secure their first piece of major silverware – the League Cup – which also guided the Swans into the Europa League.

Cup competitions have not been an issue for the Welsh outfit this season, as they have beaten Manchester United on their way to the fifth round of the FA Cup, but Premier League form has certainly been a worry.

The Swans may be sitting in 12th place in the table but with two points between themselves and the relegation zone, the hierarchy at the Liberty Stadium has decided to take action.

A 2-0 defeat to fellow strugglers West Ham seems to have been the last straw for Laudrup, who during his time with Swansea was constantly linked with moves to other clubs when vacancies arose.

With a Premier League set-up at the Liberty Stadium, it won’t be hard for the club to attract a new manager and a number of candidates are bound to be linked.

Roberto Di Matteo, who helped Chelsea win their first ever Champions League, is still out of work since his departure from Stamford Bridge and will be touted for the job.

In the meantime, the caretaker role has been filled by Garry Monk and he will lead the side against Cardiff, with the Swans 1.78 to secure victory over their rivals.