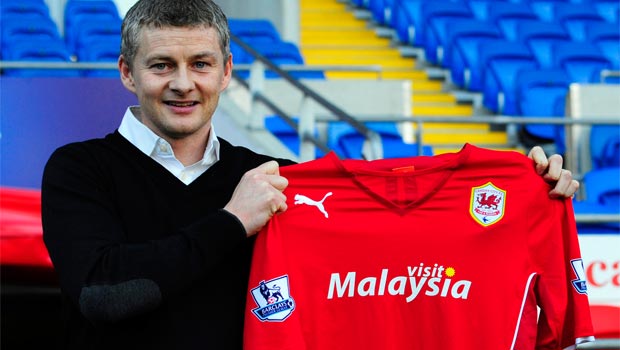 Arsenal boss Arsene Wenger believes Ole Gunnar Solskjaer has all the necessary tools at his disposal to keep Cardiff in the Premier League as he gets set to take over as Bluebirds manager.

The former Manchester United striker is expected to be named the next head coach of the Welsh club before the FA Cup clash with Newcastle United on Saturday having watched the game with Arsenal from the stands.

Cardiff owner Vincent Tan sent his private jet to collect the 40-year-old ahead of the clash with the Gunners after there was a breakthrough in negotiations, and the duo sat side-by-side at the Emirates Stadium to watch Arsenal’s 2-0 win on Wednesday.

That result saw the Bluebirds slip to within one point and one place of the relegation zone after a run of one win from the last 10 matches.

Solskjaer, who is currently in charge of Norwegian club Molde, is expected to be given extensive backing in the transfer market in order to save Cardiff from relegation, although Wenger believes he won’t have to spend too much to keep his new team up.

The Frenchman was impressed by Cardiff on New Year’s Day and believes all they are lacking is a striker who can find the back of the net on a regular basis.

“I have seen him before the game, and they played like they knew he was in the stand,” said Wenger when asked about Solskjaer’s expected appointment as Cardiff boss.

“Cardiff has the basic ingredients to survive in the Premier League. You would say if you look at their record they need to add a bit more goals offensively to stay in the league.

“If he (Solskjaer) can find that in the final third, something clinical like he was, then they will stay in the league because they have the basic quality to do it.”

Cardiff’s caretaker boss David Kerslake agrees with Wenger, claiming the new manager should not need to spend heavily in January in order to avoid relegation.

“Whoever comes in, obviously there is an important month coming up, so if he can add to it, make the squad better, then all well and good, but I believe the team are good enough to stay in the Premier League,” said Kerslake.