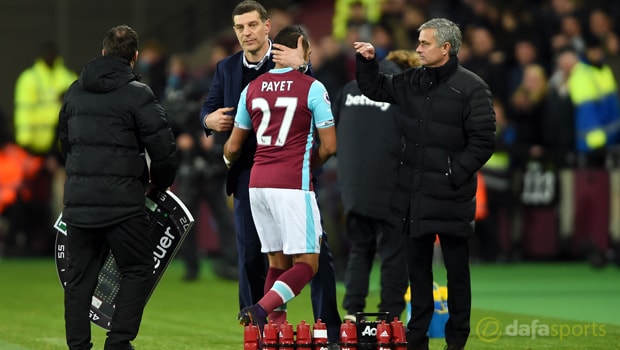 Payet has been linked with a move away from the London Stadium, with former club Marseille said to be interested in a big-money move for the French international playmaker.

Bilic is adamant that West Ham have no desire to allow Payet move on and he does not believe the player’s form has been effected by the transfer rumours.

Payet was replaced shortly after Juan Mata scored United’s opening goal in a 2-0 win, but his manager insists people must remember how busy the festive programme has been.

“I didn’t think he was troubled,” Bilic said regarding speculation on Payet’s future. “He was really very good against Swansea, and again against Leicester.

The fixture list makes things difficult, but don’t forget the energy Dimitri put into [this] game. Look at the tracking back he had to do to counter [Antonio] Valencia.”

Payet scored nine goals as West Ham finished seventh last season, his first in England since joining the Hammers from Marseille and he has since signed a contract extension through to 2021.

Bilic is happy with his player and certainly does not see him moving on.

“He’s our best player, but we played a couple of days ago, and the way he’s playing in the game and the position.

“It’s clear, we don’t want to sell him. We want to keep our best players, and in our position, we need them.”