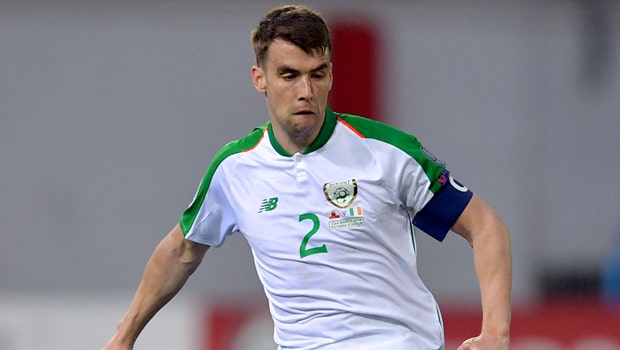 Republic of Ireland captain Seamus Coleman says he has concerns about fighting for his place in the team with Matt Doherty.

The Everton stalwart was made captain by Martin O’Neill after Euro 2016 and his retained the role under Mick McCarthy.

The Toffees full-back has however got competition for his berth at right full-back from impressive Wolves defender Doherty, who thrived in his first season of Premier League football, both as a defensive player and carrying an attacking threat in Nuno Espirito Santo’s outfit.

The pair both featured in the scrappy win over Gibraltar as Ireland started their Euro 2020 qualifying bid in shaky fashion, but McCarthy soon admitted it didn’t quite work tactically, with Doherty was subsequently left out against Georgia in Dublin for a 1-0 win.

Coleman is wary of thinking places are assured and says it is good for the squad to have competition.

“That’s the manager’s decision. Matt and I get on quite well. We work hard in training. Everyone knows Matt’s played that role a little bit ahead of me, that right-wing back role, whereas I play the right-back role,” said Coleman.

“I’m sure if the manager was playing wing-backs then it could be a different situation. It’s not different for Matt, me or whoever. None of us take our places for granted. My whole career I haven’t taken my place for granted.

“My whole career I haven’t taken my place for granted because it’s a slippery slope. It’ll just be working hard and trying to get the best out of each other.”

Ireland face Denmark and Gibraltar next month in their latest qualifiers and are in Portugal on a training camp this week.