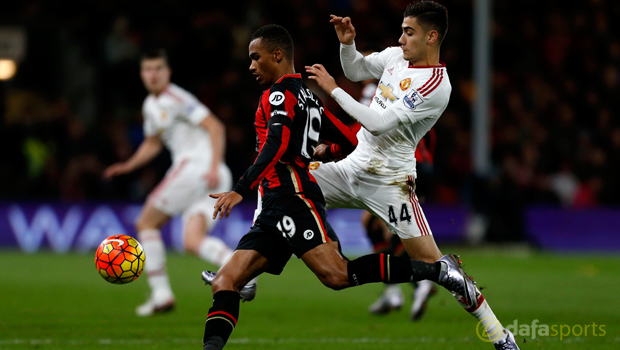 The Cherries capped a famous week in their club’s history by following up victory against champions Chelsea at Stamford Bridge with a 2-1 success against the Red Devils at the Vitality Stadium on Saturday.

Francis and striker Glenn Murray have revealed just how much Eddie Howe’s side were relishing the clash with the former champions and they insist there was never any fear of taking on the Old Trafford outfit.

“To be honest, I don’t think they have that aura any more probably because of the way they’re playing at the moment,” Francis told the Daily Mirror.

“Then again, you still have to realise they could have gone top with a win.

“It’s incredible how the Premier League is panning out, everyone seems to be beating everyone in the division but their fear factor is certainly a little bit different.”

Goals early in each half from Junior Stanislas and Joshua King gave Bournemouth the win with Marouane Fellaini’s first half response not enough to stop van Gaal’s team slipping to a third league defeat of the season.

Murray says seeing United drop out of the Champions League with defeat to Wolfsburg in Germany had given Bournemouth the belief they needed to go and win Saturday’s game.

Murray revealed he took real belief from seeing the team-sheet and the back four that van Gaal was forced to field in the face of a mounting injury list.

“When you come across Man United and you see a back four like that, I think you almost have to fancy your chances,” said Murray.

“It’s a very different United line-up to what we are used to over the years.”

Following their recent successes, Bournemouth are 3.75 to be relegated from the Premier League this season. Sunderland are 1.29 to go down with Newcastle 2.62.