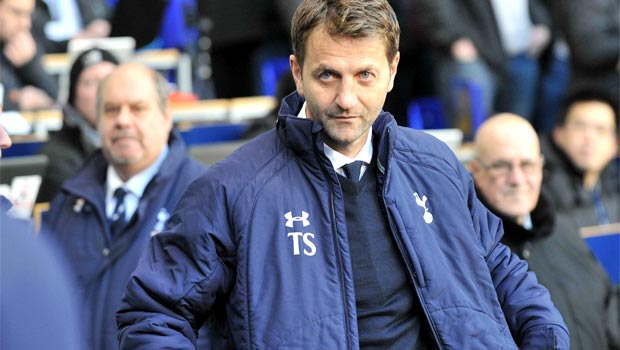 Newly-appointed Tottenham manager Tim Sherwood has admitted he hopes to work more closely with the team once the busy period of Christmas fixtures is over.

The 44-year-old faces three games in the space of seven days, first welcoming Mark Hughes and Stoke to White Hart Lane on Sunday, followed by two away matches against Manchester United and Arsenal in the Premier League and FA Cup respectively.

In what has been a busy period for all of the teams in the league, Tottenham have so far managed to take 11 points from a potential 18 in December so far, results which see the side sit in eighth position in the table, but Sherwood insists the side will become more cohesive when the busy festive period ends.

“I think we will improve, it has been difficult [since he got the job permanently] because it has been hectic and the number of the games means we have not been able to give too much instruction to the boys in training,” he said.

“It’s a new voice and we are asking them to play in a slightly different manner and hopefully they are going to get better and better at it.”

Sherwood, who earned a point in his first game as head coach in a 1-1 draw with West Brom on Boxing Day, will be hoping to end 2013 on a high note and send Spurs into the New Year with renewed optimism for the second half of the campaign with a win over Stoke this Sunday.

The north Londoners have only lost two of the last 38 home league meetings between the sides, but this record will be put to the test with the visitors looking to bounce back from the 5-1 thrashing they received at the hands of Newcastle United on Boxing Day.