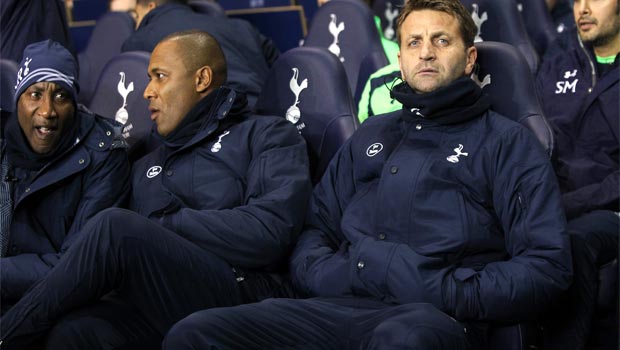 Tottenham caretaker boss Tim Sherwood is hoping for a swift response from his men when they take on West Ham United in the quarter-finals of the Capital One Cup.

The 44-year-old has been placed in temporary charge of first-team affairs following the departure of Andre Villas-Boas and his first assignment will be to get past Spurs’ London rivals at White Hart Lane.

The season promised much for the north Londoners with a number of new faces brought in after Gareth Bale’s exit but, despite sitting in seventh place in the Premier League table, there have been a number of disappointing performances which culminated in the 5-0 drubbing at home to Liverpool at the weekend.

Sherwood is the man who has been charged with the task of trying to turn things around while the board decide on Villas-Boas’ permanent successor, and the former Spurs’ midfielder has had little time to work with his charges in the run-up to the midweek clash.

But he hopes that the players can take on board a bit of what he has to say to try and get the feel-good factor back at the club.

“When you lose your manager it’s a change and you’ve got to listen to a different voice,” told Spurs TV. “But I’m hoping to get a few messages across in a short space of time so we can get a positive result against West Ham.”

Tottenham’s 3-0 defeat at home to the Hammers back in October is seen as one of the results that was responsible for the Portuguese tactician’s exit and, with that in mind, Sherwood is desperate to get one over on Sam Allardyce’s men this time around.

“It’s a huge game, especially on the back of what they did to us at the Lane,” he added. “It was disappointing.”