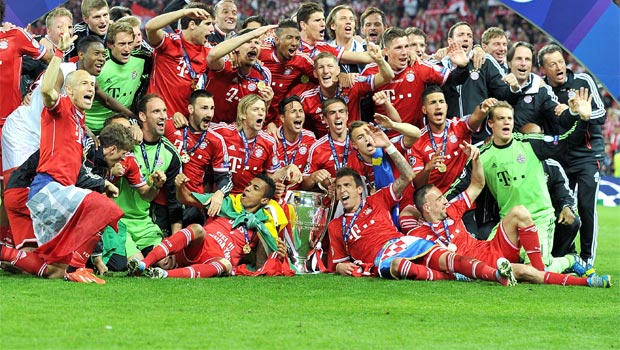 Bayern Munich are now targeting a fifth trophy of the year after beating Guangzhou Evergrande to reach the final of the Club World Cup.

The German giants went into the match as huge favourites and goals from Franck Ribery, Mario Mandzukic and Mario Gotze were enough to seal a 3-0 victory over Marcello Lippi’s Asian champions.

The Bavarians will now face the winner of the other semi-final between Brazil’s Atletico Mineiro and Moroccan side Raja Casablanca in Morocco on Saturday.

It has already been a memorable season for Bayern as they won the Bundesliga title, the DFB-Pokal and the Champions League, before lifting the UEFA Supercup in August with a penalty shoot-out triumph over Chelsea.

And, as the halfway stage of the current campaign approaches, the Allianz Arena outfit find themselves seven points clear in the German top-flight standings and on course for further glory.

But club captain Philipp Lahm is still not satisfied and wants another trophy in the cabinet ahead of the Festive period.

“We now want the title,” he told the club’s website. “That would allow us to go into the winter break in relaxed mood.”

Coach Pep Guardiola echoed his skipper’s words and now wants them to build on an impressive display to claim the trophy at the weekend.

“We played a serious game against a side who had some fast wingers,”
he stated.”We controlled the game with a lot of possession and created lots of chances.

“I’m very happy and am pleased for my players and the club and hope we will win the title on Saturday.”