Shay Given: ‘No slip-ups against Georgia’

Posted by Fred McKinley on September 6, 2015 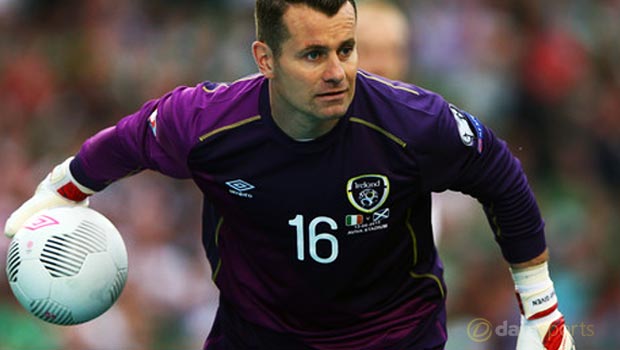 Republic of Ireland goalkeeper Shay Given says his side must be on guard to ensure there are no ‘twists or turns’ when they face Georgia in Dublin on Monday.

The Republic’s hopes of qualifying for the Euro 2016 Finals in France were given the kiss of life when Georgia defeated Scotland 1-0 in Tbilisi on Friday.

With Martin O’Neill’s side swatting aside Group D whipping boys Gibraltar 4-0 in Faro on the same evening, they were able to leapfrog Scotland to take third spot, putting themselves in line for a playoff place in the process.

Scotland defeated Ireland in Glasgow last November and recovered from a goal down in Dublin in June to earn a point that gave Gordon Strachan’s team the upper hand in the battle for third spot.

Given says that having pinned their hopes on more ‘twists and turns’
in the group, they must now be on guard to ensure they are not victims themselves against Georgia in the Aviva Stadium.

“We wanted them to win (against Scotland), but the thing is they’ll be coming to Dublin with confidence and belief,” he said.

“We said after the Scottish game in Dublin that there would still be a few twists and turns, and (Friday) has shown that that’s the case,”
said the veteran stopper.

Given knows that Georgia will be a much more difficult test than Gibraltar were but he says Ireland simply cannot afford to give Scotland a reprieve with O’Neill’s squad facing Germany and Poland in their final two games.

“Obviously Georgia are a better team than the guys (on Friday night), so it will be a tougher game, but we are at home and we need to win the game.

“Scotland will be kicking themselves a little bit, but we have got tough games coming up,” he added.