Serie A: Roma midfielder not giving up on Scudetto 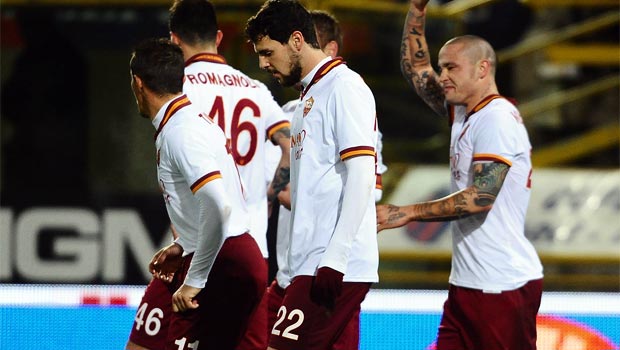 Roma are nine points adrift of Serie A leaders Juventus but midfielder Radja Nainggolan insists they cannot give up on the Scudetto yet.

The Giallorossi have a game in hand over their title rivals, and Nainggolan insists the battle for the Serie A crown is not over yet.

“As long as we’re not mathematically out of it, we have to believe,” he told Mediaset.

Roma host Inter Milan on Saturday and are 1.60 to secure the victory, while Juventus face a trip to AC Milan on Sunday and can be backed at 2.05 to come out on top.

The Giallorossi have lost just once this season, a 3-0 defeat to Juventus in January, while the Bianconeri have also lost just once, to Fiorentina in October.

However, Juventus have managed to win 21 of their 25 Serie A matches to date, while Roma have 17 wins from 24 games and will be looking to see off Inter on Saturday to keep the pace with the current table toppers.

Nainggolan, meanwhile, is keen to play a key role for his side this season in order to ensure he is included in the Belgium squad for the World Cup this summer.

The 25-year-old, who has managed five appearances for Roma since joining the club on loan from Cagliari in January, has four caps to his name and is desperate to travel to Brazil in the summer.

Nainggolan feels if he can keep his place in the Roma side he stands a good chance of making the Belgium squad, although he admits he faces a battle to be involved for both club and country.

Nainggolan, who is set to complete a permanent move to the Stadio Olimpico in the summer, added: “The abundance of midfielders at Roma doesn’t scare me, the Scudetto is long and we must all do our part. The more players, the better – the competition is good for me making the World Cup squad.

“I think I have a chance. In recent years I was given a chance and I have deserved it.”