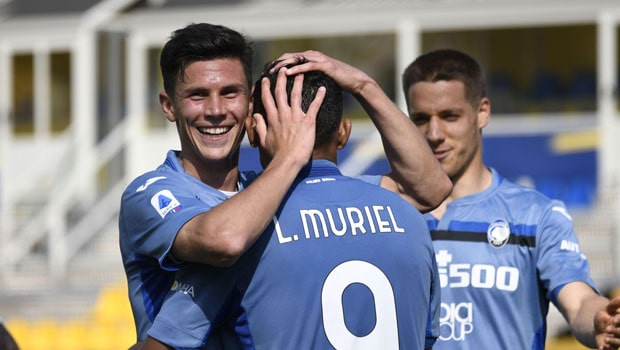 Atalanta recorded an emphatic win on Sunday against relegated Parma to hold on to the second spot at the expense of AC Milan and Juventus.

The win takes Le Dea to second on the log as the battle for the Champions League spots hots up. AC Milan that maintained the top spot for a long time this season, now occupies the third spot after thrashing the former champions 3-0 at the Allianz Stadium on Sunday. The win puts them on the same points as Le Dea but has an inferior goal difference.

At Stadio Ennio Tardini, Atalanta, aiming for their third consecutive Champions League after making their debut two seasons ago in the competition, reached the quarter-finals recorded an easy win against their already-relegated hosts that have begun planning for life in Serie  B.

The match against the Ducali allowed Le Dea to hold the second spot as Juventus and Milan went head-to-head.

The visitors wasted no time by converting their first chance of the game through Ruslan Malinovsky. The Ukrainian midfielder’s left-foot daisy-cutter squirm through Jasmin Kurtic’s legs into the bottom corner from the edge of the box.

Matteo Pessina, who was introduced in the second half alongside Luis Muriel, made an immediate impact to double Atalanta’s lead by sweeping into the far corner with the inside of the left boot after a well-worked passing team move.

After wasting several chances afterward, Atalanta got the third through a passing move that tore the Parma defense to shreds. Aleksei Miranchuk released a pass to Mario Pasalic, who rolled across for Muriel to finish it off one-on-one.

Parma later reduced the deficit. Maxime Busi collected a long ball and skipped away from Maehle before rolling across for Juan Brunetta’s tap-in.

Atalanta got lucky, renewing their three goal-lead as Sepe only managed a sensational fingertip save from Pessina, which also hit the upright, before bouncing kindly for Muriel.

Parma reduced the deficit again as Simon Sohm scored his debut Serie A goal when he ran onto the Graziano Pelle assist before waltzing around Pierluigi Gollini.

Atalanta later got their fifth in the stoppage time. Despite making two desperate point-blank reaction saves in a row from Sepe on Maehle, the goalies couldn’t stop Aleksei Miranchuk’s rocket from going in.