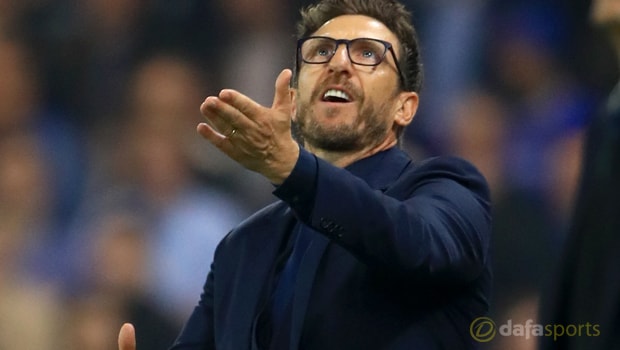 Eusebio Di Francesco has slammed Roma’s second-half display after they surrendered a one-goal lead to lose 2-1 against Shakhtar Donetsk in the first leg of their Champions League last-16 tie.

Cengiz Under continued his rich run of goalscoring form by putting the Giallorossi in front in the first half at the Metalist Oblast Sports Complex before second-half strikes from Facundo Ferreyra and Fred handed the advantage to the Ukrainian side.

Di Francesco was frustrated after the match as he believes his players dropped their levels considerably during the second 45 minutes.

“We dropped badly after their [first] goal but not just physically, above all psychologically,” Di Francesco told Mediaset Premium.

“In the first 50 minutes we played to hurt Shakhtar, in the second we played to control – what we were supposed to be controlling, I don’t know.

“I am not at all satisfied with the second half. We made far too many mistakes, above all with those players who have experience at this level. It was like seeing two different teams.”

The former Sassuolo boss believes he could have substituted half his side during the second half as he is convinced it was his team’s mistakes, rather than Shakhtar’s quality, that turned the match on its head.

He added: “Shakhtar are very dangerous when attacking, we knew that, but it was our play that was the problem, with too many mistakes and our passing was not at all clean.”

Roma will be looking to turn the tie around when the two teams meet in the second leg at the Stadio Olimpico on March 13.

They are priced at 67.00 to go all the way and win the Champions League this season.