Posted by OLADIPUPO MOJEED on November 29, 2021 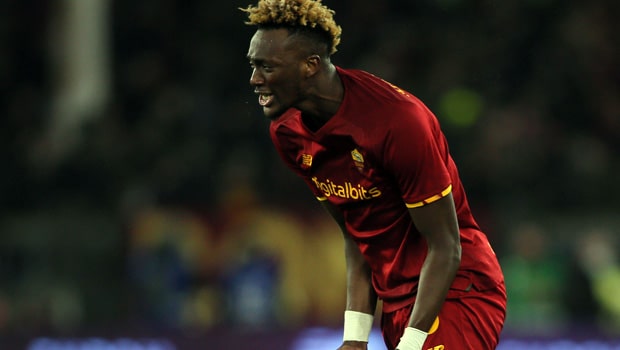 Tammy Abraham’s goal against the run of play on Sunday secured maximum points for AS Roma against Torino at the Stadio Olimpico.

The match didn’t end without a VAR drama around a penalty.

In the game Torino dominated possession and both teams lost Andrea Belotti and Pellegrini to injuries, Dennis Praet tested Rui Patricio from distance.

The goalie also handled Praet’s diving header from Wilfried Singo cross, while Tommaso Pobega blasted over from the edge of the box.

Before Abraham scored the only goal that secured the maximum points for the hosts, he and Rui Patricio blocked Alessandro Buongiorno’s effort from six yards on a corner.

With nothing to show it, Roma broke the deadlock against the run of play. Abraham collected Henrikh Mkhitaryan’s through ball and turned quickly to pass it into the far bottom corner with the inside of the right boot from just inside the box.

The Englishman after the match said he had to thank the Roma fans for believing in him and he is never afraid to prove himself on the pitch.

Roma were initially awarded a penalty moments later when Buongiorno mistimed his tackle and brought down Stephan El Shaarawy in the box. However, the decision was overturned after a delay of over five minutes for a VAR check.

The penalty was later cancelled after it showed that Abraham was offside before the incident.

The former Chelsea striker on the stroke of halftime tested the palm of Vanja Milinkovic-Savic who fingertipped the header over from a corner.

In the second interval, the visitors resumed dominating possession. Bremer’s shot tested Patricio in the box again from a distance and the goalie later rushed off his line to block Praet on a through ball.

Roma did the job by holding on to their one-goal lead and take the maximum points.

However, in another fascinating Serie A game, Napoli made mincemeat out of Lazio. Spalleti’s men thrashed Lazio 4-0, with Dries Mertens scoring twice.