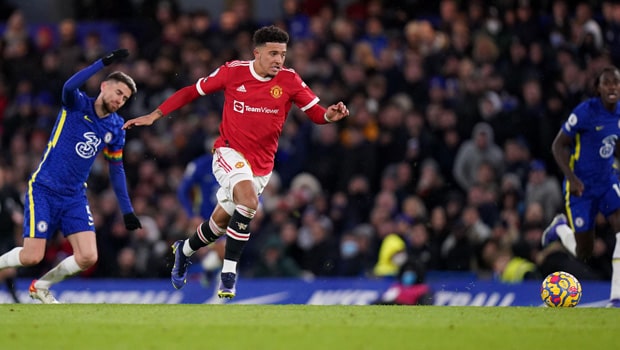 An in-form Chelsea held Manchester United to a 1-1 draw on Sunday at the Stamford Bridge in the Premier League. The game is Micheal Carrick’s second as interim and most likely last as reports indicate the imminent appointment of Ralf Rangnick.

After his first game in the UEFA Champions League ending in a win against Villarreal at the midweek, Carrick was hoping to oversee a Premier League victory.

Manchester United took the lead through Jadon Sancho early in the second half after a goalless first half.

The lead lasted just over 15 minutes as Aaron Wan-Bissaka fouled a Chelsea defender in the box as Jorginho stepped up to score the resultant penalty.

Meanwhile, Manchester City beat West Ham United 2-1 at the Etihad stadium, Ilkay Gundogan opened the scoring in the 33rd minute. Riyadh Mahrez had had a goal disallowed in the 16th minute by the VAR for an offside.

The second goal didn’t come until the 90th minute for Pep Guardiola’s side but Manuel Lanzini had time to score a consolation for the Hammers in added time but it was too little too late.

Meanwhile, Jamie Vardy scored a brace to break his goal scoring drought for Leicester City in the team’s 4-2 win over Brentford in the Premier League.

James Maddison scored the first goal of the six goals thriller in the sixteenth minute before Josh King equalised for Watford in the 30th minute.

Jamie Vardy then scored the first of his brace four minutes later before scoring his second and Leicester City’s third just before half-time as he benefited from James Maddison for the second time in the first half.

Emmanuel Dennis scored his fifth goal since joining Watford in the 61st minute before Ademola Lookman made it four for the home side seven minutes later.

Ivan Tobey’s first half penalty was enough to see Brentford to a 1-0 win against Everton but Burnley against Spurs was suspended due to weather problems.