Pentagna excited about winning goal for Napoli despite uncertain future 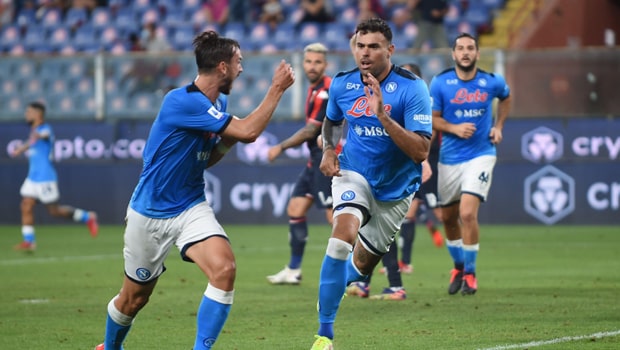 Napoli striker Andrea Petagna has admitted that he ‘didn’t even expect to be in the team on Sunday night when he scored the winning goal for the Azzurri against Genoa.

He has been linked with a move to Sampdoria but was brought in by coach Luciano Spalletti and he rewarded the team with a match winning goal. Although, the former AS Roma coach has hinted that Sampdoria transfer might not go through.

The centre-forward came to the team’s rescue off in the clash with the result at 1-1. Within three minutes of his introduction, he scored the winner with a glancing header.

Speaking with DAZN, Petagna who couldn’t wait to get on that pitch noted his difficulties with injury, said he  felt better and knew he would score.

According to reports, Petagna was on the verge of moving to Sampdoria, with Morten Thorsby coming the other way. But the goal seems to have made Spalletti pointed to him that he is staying.

Lauding the manager for trusting him, he said his teammates this week also thought he would score this evening.

While noting that his physicality took him a while to get back to full fitness, the striker remains confident that he has a lot in his locker.

Concerning transfer, Napoli director of sport Cristiano Giuntoli has hinted that the club might welcome some new players. The transfer window closes on Tuesday August 31.

Insigne current deal ends June 2022. Negotiations over a renewal have hit a brick wall for weeks.

He also revealed that there is no progress on Lorenzo Insigne’s contract. The winger had wanted a pay rise but Napoli cannot afford his demand. This has made him to be linked to Inter Milan who could wait till the end of the season to sign him on a boss man deal.

While expressing confidence that the team is almost intact from last season, Giuntoli said Spalletti can give a little bit more than what they were missing last season.

Expressing satisfaction over the team’s transfer business, he expressed satisfaction that they kept all the most important players, which gives the team hope that for the future.