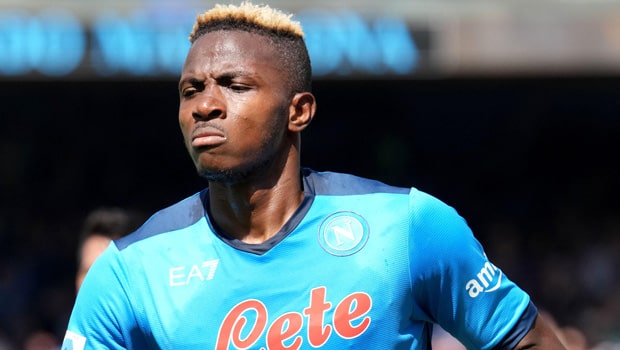 The Super Eagles played their second 2023 Africa Cup of Nations qualifier against Sao Tome on Monday, days after beating Sierra Leone 2-1 in Abuja.

Led by Portuguese coach Jose Peseiro, the Super Eagles started brightly, scoring three in the first half. Peseiro went with his preferred 4-4-2 deciding to go with Moffi replacing Sadiq Umar, while Ademola Lookman came in from Samuel Chukwueze, who started in Abuja.

Victor Osimhen opened the scoring in the ninth minute, ye could have made it two more a few moments later, but his goals were chalked offside.

However, there was no denying Nantes Winger Moses Simon in the 28th minute, and Terem Moffi made it 3-0 before halftime with his first Super Eagles goal. It didn’t take long before the scoring resumed in the second half.

Three minutes after the restart, Osihmen made it 4-0, and Watford midfielder Oghenekaro Etebo made it 5-0 with the goal of the game, a spectacular free-kick that hit the underside of the bar.

Skipper and Substitute on the day, Ahmed Musa, provided Osihmen with the assist for his first hat-trick in the Nigerian senior national team hat-trick.

Two goals in the final ten minutes came from Osihmen and a late penalty from Emmanuel Dennis.

The result puts Nigeria on top of the table with six points from two matches played.