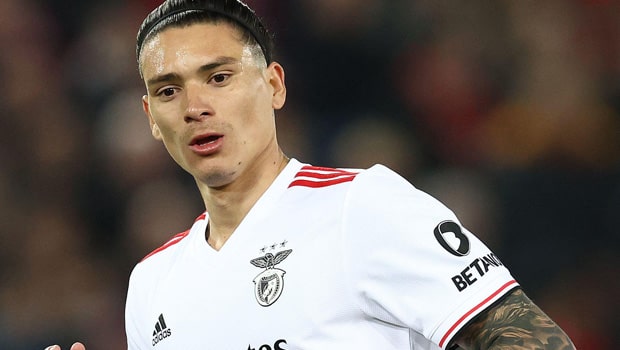 Uruguayan striker Darwin Nunez has completed his move to Premier League side Liverpool on Tuesday evening. The player signed a six-year deal with the Kop for a deal worth an initial £64m.

There are add-ons expected to take the total worth of the deal to around £80M as the Uruguayan striker looks potentially to become the club’s record signing with the add-ons.

The add-ons are linked to the number of appearances and Liverpool’s ability to win trophies, especially the UEFA Champions League.

Currently, Liverpool’s biggest signing is Dutch defender Virgil Van Dijk who joined Liverpool in 2018 from Southampton for a few worth £75 million.

He becomes Liverpool’s second signing of the summer after Portuguese 19-year-old striker Fabio Carvalho agreed to join the club from Fulham in May.

Nunez’s move is still subjected to a work permit and international clearance, but the 11-cap Uruguayan is already looking forward to winning trophies with the team.

“When I arrived at the training ground, I was really surprised to see the set-up and the structure and all the trophies here. You can then imagine yourself winning more trophies. That’s one of the reasons why I came here to Liverpool – to win trophies and titles.” Nunez said.

Nunez scored 32 goals for Benfica in all competitions, although 26 of those goals were in 28 Portuguese top-flight matches, becoming the league’s highest goalscorer at the end of the season.

He also hit the back of the net six times in ten UEFA Champions League games last season. Two of those goals were in the quarterfinal fixtures against Liverpool.

Liverpool won the FA Cup and the Carabao Cup last season, although they couldn’t complete the quadruple after failing to win the Premier League finishing second behind Manchester City, and also losing to Real Madrid in the final of the UEFA Champions League in May in Paris.