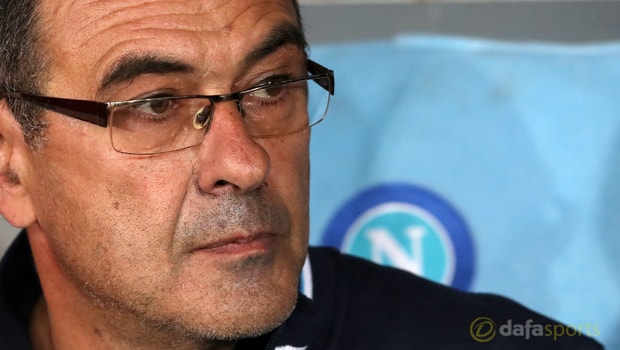 Maurizio Sarri has confirmed his representatives will meet with Napoli president Aurelio De Laurentiis over the next few days to discuss a potential new contract for the 59-year-old.

Sarri has been in charge of the Partenopei since the summer of 2015, securing top-three finishes in his first two seasons at the helm, but things could get even better for the former Empoli boss this term, as his side are a point clear at the top of the Serie A standings.

Indeed, Sarri’s work has not gone unnoticed, as he has been heavily linked with taking over the managerial reins at Chelsea should his compatriot Antonio Conte vacate that position.

However, such talk appears to be just speculation with Sarri confirming that his representatives are set to hold talks with De Laurentiis regarding a new contract this week.

“I want to focus on other issues right now, so someone will meet with the president over the next few days and listen to the proposal on my behalf,” Sarri told Mediaset Premium.

“There’s no problem between Aurelio and I, so it’s not an issue.”

For the time being Sarri’s main concern is to help guide Napoli to a first Scudetto since 1990, but the experienced coach believes his side are already succeeding expectations by rivalling nearest rivals Juventus for the title.

“We cannot feel pressure, because we are going beyond anyone’s expectations,” he added.

“Don’t forget, pre-season you all said it was a fight between Juventus and AC Milan. We are doing better than I expected, than the club expected, so there is zero pressure.”

Napoli are next in action when they play host to third-place Lazio on Saturday and they are priced at 1.70 to win that match, while the Biancocelesti are available at 5.00 and the draw is on offer at 3.80.