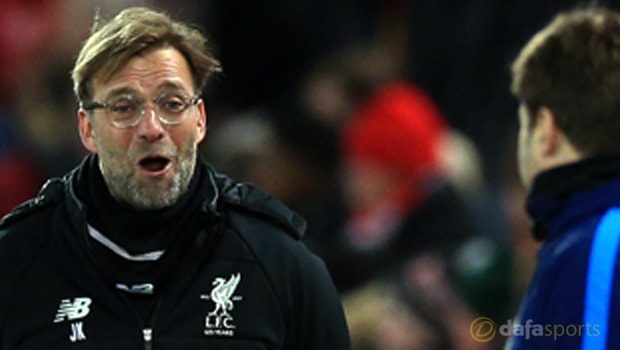 Liverpool boss Jurgen Klopp was left frustrated by the officiating as his side were held to a dramatic 2-2 draw by Tottenham in the Premier League on Sunday.

Mohamed Salah twice gave Liverpool the lead during the enthralling contest, with the Egyptian’s second goal coming in stoppage time to seemingly hand all three points to the Merseysiders.

However, Spurs, who had previously levelled through Victor Wanyama’s wonder strike and who had already had a controversial Harry Kane penalty saved, were then awarded another spot-kick which the England international this time converted to score his 100th Premier League goal.

Kane himself had been adjudged to have been found by Liverpool goalkeeper Loris Karius for the first penalty, although there was a possible offside in the build-up, while Virgil van Dijk’s challenge on Erik Lamela brought about the award of the second spot-kick.

Klopp was clearly frustrated by the officiating of referee Jon Moss and his assistants, but he did not want to express his annoyance too much after the match.

“It was a very intense game. There were a lot of kicks not given and then the softest kick earns a penalty,” Klopp said at a news conference.

“I heard Lamela was offside as well and runs into Van Dijk. He was already on the way down.

The referee was saying play on and the linesman decided otherwise. For the first penalty, Kane was offside. My defence put him offside, it was good defending.

“I am angry but obviously I cannot change it now. What is my job now? To create headlines? If I say what I think I would get the biggest fine in world football.”

The point leaves Liverpool third in the standings, two points clear of fifth-place Tottenham and the Reds are priced at 1.29 to secure a top-four finish come the end of the campaign.