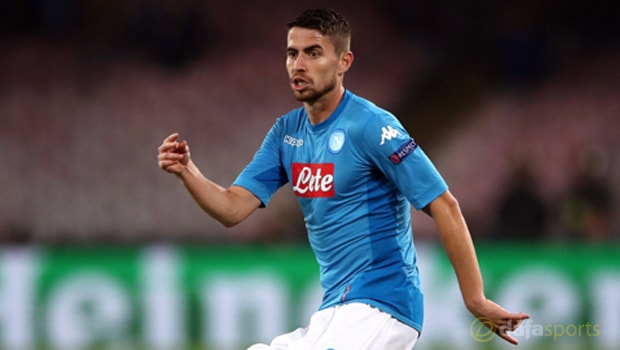 Jorginho’s agent, Joao Santos, has confirmed Manchester City are interested in signing the Napoli midfielder and suggested a deal is likely to go through this summer.

City won the Premier League title this season with a record 100 points but manager Pep Guardiola is not taking a step back as he aims to strengthen his squad in the upcoming transfer window.

The Citizens, who will see Ivorian Yaya Toure leave on a free transfer when his contract expires at the end of June, have been linked with a number of players already and Shakhtar Donetsk midfielder Fred was said to be high on the list.

However, latest reports claim the interest in the Brazilian has now diminished and all of the Manchester club’s attention is being focused on signing Italy international Jorginho.

The 26-year-old has received rave reviews for his impressive performances for Napoli, who missed out on Serie A glory this term after a close battle with Juventus, and several top European clubs are keeping an eye on his situation.

It appears City have stolen a march in the race for the midfielder’s signature after his agent revealed the English champions are looking to wrap up a deal.

“Jorginho is still under contract, but if Napoli find an agreement with City then he goes to Manchester,” he told CalcioNapoli24.

“Finding an agreement with the English won’t be a problem, considering their importance, but I repeat it depends on Napoli as the player is tied to the Azzurri for two more years.

“City are champions of England and among Europe’s top clubs.

Now we must stay calm. If Napoli and City find a solution, we can talk about it, otherwise, the player will be happy to stay at Napoli.

“For now, I haven’t heard from anyone at Napoli because I imagine they’re busy planning for next season.

I hope to hear from their director, and maybe he’ll be in Naples in the next few days to talk about [Jorginho].”

City have been installed as early 1.67 favourites to win the 2018/19 Premier League title whilst Liverpool are next in the betting at 6.00, just ahead of Manchester United at 7.00.