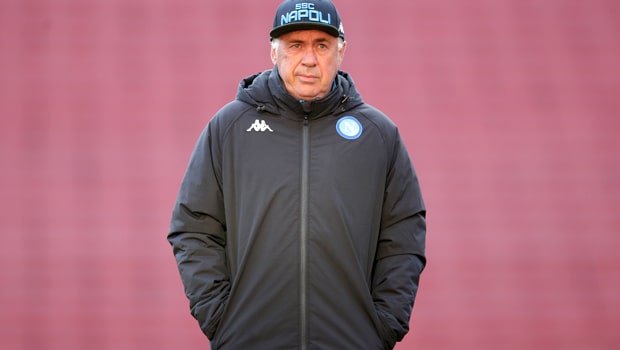 Carlo Ancelotti anticipates Napoli will deliver a “brilliant performance” when Arsenal visit them for their Europa League quarter-final second leg.

The Gunners are armed with a 2-0 advantage from the first leg, with Aaron Ramsey’s strike and an own-goal from Kalidou Koulibaly having given Unai Emery’s side control of the tie. Ancelotti, howeve,r feels the ingredients needed to bring Napoli back into the tie are there for his side.

“I’m sure we’re going to put in a brilliant performance,” the 59-year-old said. “Will it be enough? I think so, I think we can do it.

“What do we need in three words? Courage, intelligence, heart. I didn’t see much courage in the first leg, especially in the first half.

“Intelligence – if I take as a reference the away match, we were clever in the second half of the game, but we have to do what we have to do.

“Heart and passion is what we need, along with intensity because it’s an opportunity we have to take. I think it will be a game of great intensity.”

Arsenal’s away form both domestically and in Europe has been questionable. On Monday their 1-0 win at 10-man Watford gave them a first Premier League clean sheet of the season on their travels. They’ve also lost away in both Europa League knockout rounds so far.

“We know Arsenal’s results in away games, but this is a different story. I don’t know what’s going on,” Ancelotti added.

“For sure we are going to do our best to try to change our style of play compared to the away game.” Napoli are 1.67 to win the second leg, with Arsenal priced at 4.50 and the draw is 4.00.