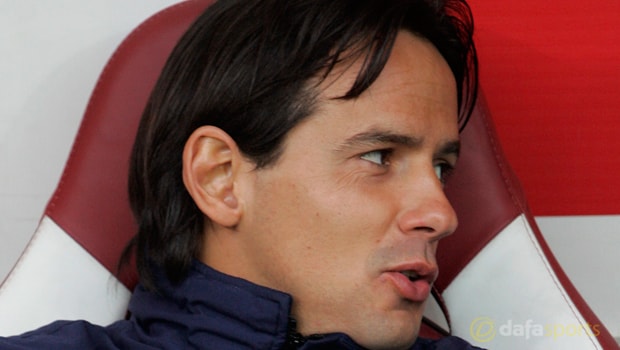 Simone Inzaghi knows the job is only half done for Lazio after they secured a 4-2 victory over Salzburg during the first leg of their Europa League quarter-final tie.

Goals from Senad Lulic, Marco Parolo, Felipe Anderson and Ciro Immobile helped the Biancocelesti to what, in the end, was a resounding victory at the Stadio Olimpico, although with 19 minutes remaining the scoreline had been 2-2, with Valon Berisha and Takumi Minamino grabbing the goals for the Austrians.

Inzaghi certainly knows the tie is not over, but he insists his side will be fully prepared for next Thursday’s reverse fixture at the Stadion Salzburg.

“We knew that Salzburg were tough and had conceded only five goals in the whole competition, but let in four on one night,” Inzaghi told Sky Sports Italia.

“The second leg won’t be easy, certainly, but we have what it takes and need the right attitude in Austria.”

Thursday’s defeat ended Salzburg’s 35-match unbeaten run in all competitions, but they still boast a fantastic home record, as they have not lost on their own patch in a competitive match since November 2016.

Inzaghi knows only too well what Salzburg are capable of on home soil, with the likes of Marseille and Real Sociedad having already lost in Austria this season.

He added: “We’ve got the advantage, but Salzburg are even stronger on their own turf and it’ll be an intense match.”

Lazio are priced at 7.00 to go on and win the Europa League this season, while Salzburg are available at 26.00.