Posted by OLADIPUPO MOJEED on January 7, 2022 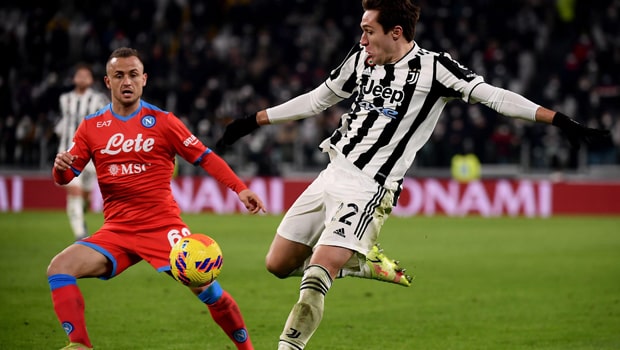 Napoli was able to hold Juventus to a 1-1 draw in the Serie A action played on Thursday night, affecting the Champions Leagues place the hope of the Bianconeri.

Although fighting for the Serie A title seems to be a long short for the Turin club, they are gunning for the Champions League place.

The visitors went ahead in the tie, thanks to Dries Mertens’ strike. But Juventus restored parity through Federico Chiesa against a Napoli side, missing nine players impressed.

Just like in October 2020, there had been doubts about the possibility of the game holding because the Partenopei had an outbreak of COVID-19 ruling that affected Kevin Malcuit, Victor Osimhen, Fabian Ruiz, Hirving Lozano,  Alex Meret, and the suspended Mario Rui, as well as coach Luciano Spalletti.

They were also without Kalidou Koulibaly, Andre Frank Zambo Anguissa, and Adam Ounas, who had gone to represent their respective countries at the Africa Cup of Nations.

Juve, on the other hand, had a few COVID-19 cases, with Giorgio Chiellini testing positive while Leonardo Bonucci, Danilo, and Aaron Ramsey were out inured.

After Juve failed to take their chance, Napoli took the lead when Matteo Politano knocked down a Lorenzo Insigne ball over the top for Dries Mertens. The Belgian, who is Napoli’s all-time highest goalscorer, drilled the ball through the legs of Alex Sandro, with Wojciech Szczesny’s fingertip not being enough to stop the ball from crossing the line.

After surviving some counter-attacking football from their visitors, Juve restored parity as Chiesa, with a bit of luck, had his shot deflected off Lobotka’s leg and squirmed past Ospina into the far bottom corner.

Reacting to the outcome of the game, Juve midfielder Manuel Locatelli said the team will feel ‘regret.’

Admitting that there was the right ‘intensity’ Max Allegri is asking for, he said Italy wants to win, but it’s a pity they had to come back from a goal down.

The Bianconeri were able to grab an equaliser through Federico Chiesa after the Dries Mertens strike had given Napoli the half-time lead.

“We played with intensity, which is what the coach asked for, and are trying to achieve that for 90 minutes to bring home important points.

“It’s an important month and could be decisive because there are some head-to-head clashes and we need to pick up as many points as possible.”

Napoli made the trip without nine players, and another three were almost ruled out by confusion over quarantine rules and their vaccination status.

There were four games called off today due to COVID quarantine orders from the local health authorities, so the Lega Serie A is trying to clamp down with a new protocol.