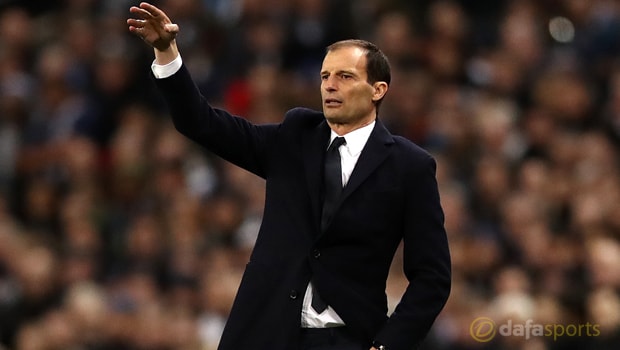 Massimiliano Allegri may be rated as one of the leading contenders to succeed Arsene Wenger at Arsenal, but the Italian tactician says he is fully focused on Juventus.

The Gunners are on the hunt for a new manager, as Wenger will leave when the season comes to a close, although Allegri has indicated he won’t be making the move to north London.

Juve crushed AC Milan 4-0 in the Coppa Italia final on Wednesday and are on course to wrap up the Scudetto, which would be a seventh successive Serie A crown for Juve, and a fourth in a row for Allegri.

Juve, who hold a six-point lead over Napoli with two games remaining, travel to Roma on Sunday.

Allegri is under contract with the club until 2020 but after the win over the Rossoneri he was asked about his future.

The 50-year-old refused to categorically rule out an exit before he stressed he isn’t looking for a move away from Turin.

“I’m not thinking about my future. I have a contract with Juventus and, as we do every year at the end of the season, we will meet up to discuss the future of the club,” he told reporters.

“Every year Juventus manage to build up a very competitive group of players, with the aim of to keep winning.

“When you sit down talking you need clarity of mind to analyse what worked out and where you need to improve. We will do this with Juventus management.

“I work for one of the best clubs in the world, we are doing important victories year after year and to keep winning is always difficult.”