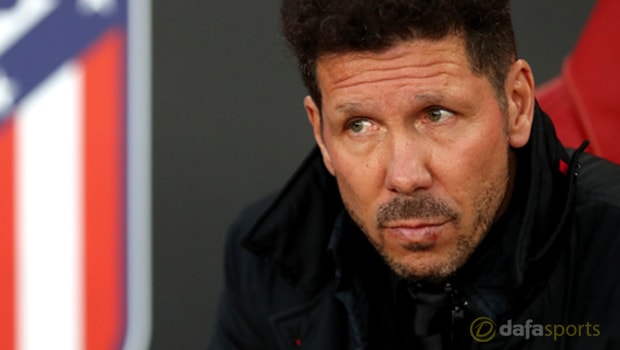 Atletico Madrid manager Diego Simeone says his full focus is on his side’s remaining fixtures rather than any transfer rumours.

Los Colchoneros seemingly face a massive battle to retain star man Antoine Griezmann, with Barcelona continuing to be linked with the France international.

The speculation could be seen as a distraction for Simeone and his squad, but the Argentine manager says he is ignoring any rumours for the time being.

Atletico Madrid head to Getafe in La Liga on Saturday before they contest the Europa League final against Marseille next Wednesday.

“My sight is limited, like a blinkered horse right now, I only look at Getafe and the final,” Simeone told reporters.

“I don’t watch or listen to anything, I only care about the game and everything that involves my team.

Los Rojiblancos were under a transfer embargo prior to the season and Simeone believes their campaign has been a successful one – especially if they land a European trophy.

“Not being able to sign anyone at the start of the season, then two arriving and five leaving [in the winter window], exiting the Champions League, now we are in the Europa League final, second in La Liga,” he said.

“It is a good season in terms of work and winning a trophy would bring us to a higher place.”