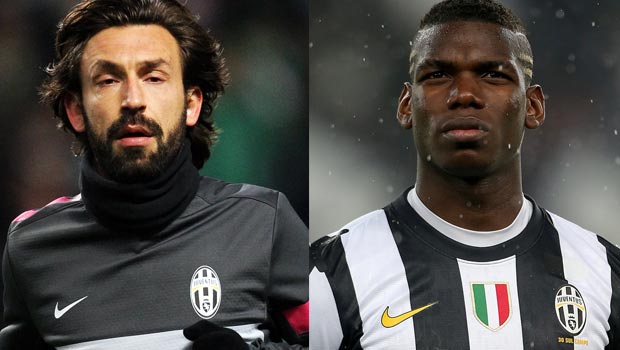 Juventus director general Beppe Marotta is confident that both Andrea Pirlo and Paul Pogba will sign new contracts at the club.

The duo have been an integral part of the Old Lady’s success, with Pirlo joining from AC Milan in 2011 and Pogba arriving from Manchester United a year later.

Pirlo has made more than 100 appearances for the Italy national side and appears to be blossoming with age, as he ran the show for 120 minutes when the Azzurri played out a 0-0 draw with England at Euro
2012 before advancing on penalties.

The 34-year-old has been a vital cog in the Juve wheel again this term, with three goals from 13 appearances as they hunted down and then overhauled Roma to sit five points clear at the top of the Serie A standings.

The veteran schemer will fall out of contact at the end of the current season and, despite his age, there has been plenty of interest in the Flero-born ace.

But Marotta, while admitting that an announcement on his and Pogba’s future is not imminent, is relaxed about the prospects for their future in Turin.

“There will be no announcements under the tree,” he told told Rai Sport. “I don’t think anything will be sorted out before Christmas, but we are calm as there is an idyllic relationship between us and the players.”

Pogba has bagged four goals from 16 top-flight appearances this season and, like Pirlo, has been linked with a move away from the club, but, with the promise of a new deal on increased wages for the France international, Marotta feels he will join Pirlo in committing to the club.

“They consider Juventus to be their home, their natural habitat and it would be hard for them to find something better,” he added. “I think we’ll resolve these situations in a small amount of time.”