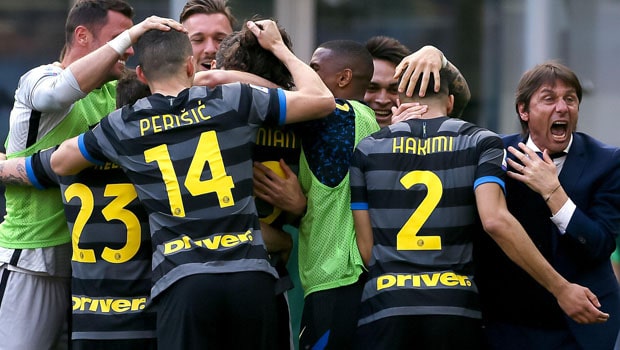 Indications have shown that Inter Milan players plan to give up on their title-winning bonuses should the club clinch their first Scudetto in ten years.

The Nerazzurri are currently topping the log with 79 points after 33 games. With 11 points separating Inter from the team in the second spot, Atalanta, they only need to win two more games to secure the tile. This might be why the manager, Antonio Conte, is confident that the club is 95 percent close to the title.

To help the club during their financial problems caused by the coronavirus pandemic, the players are ready to forfeit their title-winning bonus while the owners, Suning, are on the lookout for suitable partners who can help them support the club financially.

Like any other European club, Inter Milan has been suffering the consequences of the COVID pandemic that bring about empty stadiums and lower transfer incomes.

It could be recalled that Inter CEO Beppe Marotta in November 2020 said that the players agreed to postpone the payment of salaries for July and August to help the club in the critical phase for football.

Two other Italian media outlets further reported that the players are ready to take one more bold step to help the club.

All Inter Milan also needs is to continue their winning run as they play Crotone o Saturday. If Atalanta fails to beat Sassuolo 24 hours later, the celebration could begin a week before the decider.

The last time the Nerazzurri celebrated Scudetto’s success was in the 2009-10 when José Mourinho was in charge. They went on to win a treble that season.

After the 1-0 win over Hellas Verona, elated Conte said his side had been rewarded for being consistent, adding that the victory against such a physical team is worth nine points.