Benzema Scores in 1-1 Draw Against Chelsea 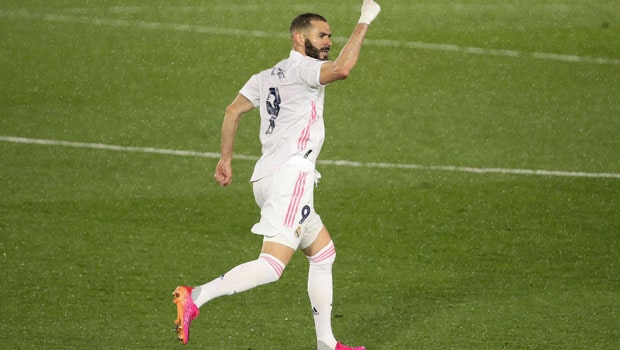 Karim Benzema continued his impressive goalscoring form against English opponents in the UEFA Champions League, as he equalised for Real Madrid in their 1-1 draw against Chelsea in  the first leg of the semi-final fixture on Tuesday evening

The blues are playing in the semi-finals of the UEFA Champions League, hoping to win the competition for the first time since 2012 when they defeated Bayern Munich to the title.

Chelsea have won two of their last three games before the match and are unbeaten since their 1-0 loss to Porto in the second leg of their quarter-final fixture.

Thomas Tuchel side defeated West Ham 1-0 in their last Premier League game while Real Madrid were held to a 0-0 draw by Real Betis in the La Liga.

Zinedine Zidane’s side had won just one of their last four matches before this game, playing three draws and a win.

On the night, it was the Blues who took the initiative, dominating Real Madrid at their home stadium, and they deservedly took the lead early in the 15th minute of the first half through Christain Pulisic. Puliaic became the first American to score in the UEFA Champions League semi-final.

French striker Karim Benzema scored a stunning goal to equalise for the Los Blancos in the 29th minute.

Both sides will face each other in the return leg next Wednesday, and the second semi-final will be played between Paris Saint-Germain and Manchester City on Wednesday evening.

Manchester City would want to take a massive step to their bid to win the treble and the UEFA Champions League by winning the first leg at the Parc De Princes.

The citizens who won their first trophy of the season after beating Tottenham Hotspur to the Carabao Cup on Sunday are still aiming for the treble as they sit on top of the English Premier League table.

While PSG knocked out Bayern Munich in the quarter-finals, City defeated Dortmund to get to the semi-finals.