Inter piles pressure on Napoli with win over Spezia

Posted by OLADIPUPO MOJEED on December 2, 2021 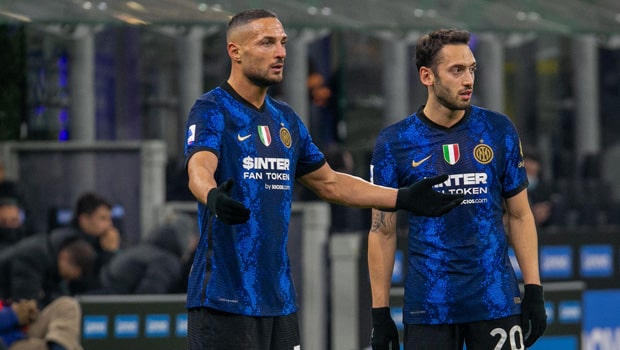 Inter have secured another three points that took them within two points to Serie A  leaders, Napoli who were stunned by Sassuolo in a 2-2 draw.

The Pertonopei had gone two goals up, only to be pegged back by Sassuolo.

Despite fielding a make-shift defence the defending champions, but still swept Thiago Motta’s Spezia with goals coming from Roberto Gagliardini and a Lautaro Martinez.

Their third consecutive Serie A win takes them to 34 points, two points behind Napoli while AC Milan occupies the second spot with 35 points after a 3-0 win at Genoa.

Although the Nerazzurri didn’t hit the ground running, they got into it and their first chance came from Tucu Correa. The Argentine shot went straight at the goalkeeper and Lautaro Martinez’s effort went wide.

They finally got a breakthrough with a well-worked move that began from Danilo D’Ambrosio. The Brazilian rolled across from the right to Lautaro Martinez whose back-heel flick set up Roberto Gagliardini to sweep in from the edge of the box.

Kiwior continued his impressive display with a crucial interception that deflected Correa’s attempt away from goal from close range.

Samir Handanovic was eventually called into action as he made a sensational one-handed reaction save from Kelvin Amian’s header on a corner. The Serbian got down so quickly from seven yards to palm it off the line.

Inter continued from where they stopped in the second half with Correa’s rocket bouncing off the underside of the crossbar. Moments later, Hakan Calhanoglu ferocious strike was beaten away by Provedel.

Inter were given a penalty after Lautaro Martinez’s flick called a ‘sombrero’. The Argentine striker’s shot hit the arm of one of the opposing players who raised it. Martinez scored the resulting kick with ease into the near bottom corner.