Posted by Akinnifesi Olumide on December 2, 2021 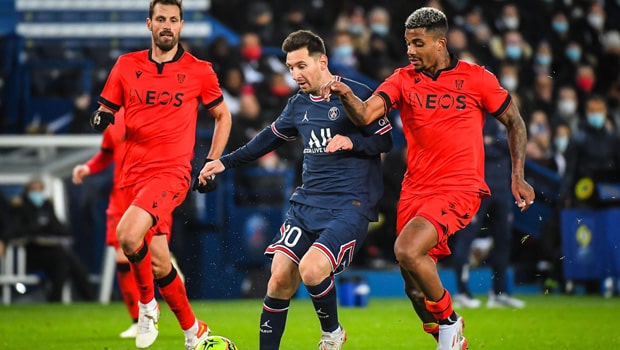 Ligue one table-toppers Paris St. Germain was held at home by fourth-placed Nice in a pulsating encounter at the Parc des Princes on Wednesday night.

Messi led the frontline for the host alongside Angel Di Maria and Kylian Mbappe with Neymar absent due to a horrible ankle injury sustained during the weekend against St. Etienne and Sergio Ramos failing to make the matchday squad due to personal reasons.

It’s been a topsy turvy week for the home side most especially for their star man Lionel Messi after clinching record seventh Ballon d’Or.

Before the match, both Messi and Gianluigi Donnaruma displayed their individual awards to the home fans greeted with a loud cheer.

The visitors got their chance in the 17th minute as they picked up a corner as Kasper Dolberg came close to scoring against the run of play tucking a powerful header was eventually too high to trouble the giant Donnarumma in goal.

Nice kept on troubling the host by taking hold of the midfield area and came close once again in the 33rd minute when the brilliant Donnarumma makes a cracking save to keep out Andy Delort’s header away from the back of the net.

PSG surged forward with the dangerous trio as Kylian Mbappe’s rifled shot was blocked by the Nice defense.

The second half resumed as both sides were looking to break the deadlock with PSG knocking at the door once more through the dangerous Mbappe firing wide from Messi’s sublime pass.

Angel Di Maria became a frustrated figure after scuffing most chances presented to him as well. He was eventually substituted in the 76th minute and Mauro Icardi brought on his place and Presnel Kimpembe came out to make way for Leandro Paredes.

Time came running down as either side failed to make the difference.

The draw keeps PSG comfortable on the top of the log with 41 points and Nice fourth with 27 points.

Up next for the Parisiens is a trip to Lens on Saturday December 4th.