Inter caps off Scudetto season in stylish fashion, while Napoli miss out on UCL 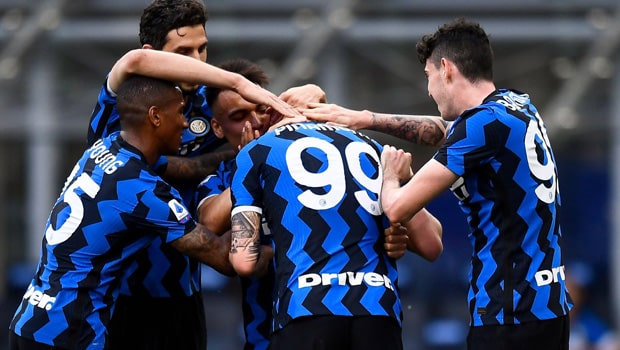 Newly crowned Serie A winners, Inter Milan, showed their attacking impetus to the delight of their fans at Stadio Giuseppe Meazza with a 5 – 1 thrashing of Udinese on Sunday afternoon.

Having confirmed their first Scudetto since the 2010-11 season, Inter only played for formality in their presence of the 1,00 spectators allowed into the stadium, and they produced a top performance with goals coming from Ashley Young, Christian Eriksen, Lautaro Martinez, Ivan Perisic and Inter top scorer Romelu Lukaku.

Inter later conceded a penalty after VAR showed how Eriksen handled the ball in the box for Roberto Pereyra to convert the spot-kick 11 minutes to the end.

After being presented with the trophy to the people in the stands, who are mostly friends and family of players and staff, there was another ceremony where they presented the Serie A trophy to a larger 4,500 crowd outside the stadium.

The hosts only needed to play for eight minutes before registering their first goal.  Young, who became the first Englishman to win both the Serie A and Premier League, completed a give-and-go with Lautaro Martinez, aided by a deflection, before dinking it over the on-rushing goalkeeper.

Udinese also got some opportunities through Rodrigo De Paul and Matias Vecino, who fired over from promising positions.

Inter doubled their lead through Eriksen’s freekick, which split the Udinese wall and deflected wrong-foot Musso.

Inter manager Antonio Conte then decide to give goalkeeper Daniele Padelli a run-out, which was his first game of the season and last in the Inter jersey. He will be plying his trade with Udinese next summer.

Thanks to Alessandro Bastoni, who rescued him from conceding an early goal after clearing off the line when De Paul combined with Roberto Pereyra to flick it over the goalkeeper from six yards.

Inter will then get the third through the spot after Achraf Hakimi was brought down in the box by Marvin Zeegelaar. Martinez stepped up to convert the penalty low into the near bottom corner.

Perisic extended their lead further after coming off the bench with a sensational goal. Lukaku, a substitute, partnered with Matias Vecino, who spread the play right to left until the Croatian’s wonderful right-foot curler into the far top corner.

Lukaku, who started the move, will finally get his 30th of the season dramatically after Alexis Sanchez’s cross hit the crossbar and landed on his chest in front of the empty net. The Belgian later missed a free header before Udinese w later awarded a penalty after VAR consultation.

The ball hit Eriksen’s hand when he misjudged a cross after the Bastoni deflection. Pereyra made no mistake from the spot and converted the penalty.